Won’t Back Down: Hollywood Needs to Back Up 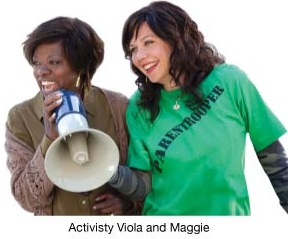 My coworker amalia told me about this movie starring Viola Davis and Maggie Gyllenhaal called Won’t Back Down so I watched the trailer and a few clips. It’s hard to spot what this pro-charter school/anti-union movie is all about. It appears to be a kind of liberal grrrl power movie about a dedicated teacher and scrappy working class woman who win hearts and minds to take over a failing school using those sneaky parent-trigger laws that are catching on nationwide. During one scene, Davis’ character even talks about the school-to-prison pipeline at a rally with a lot of scrappy-looking people doing a lot of heartfelt nodding and fist raising. Some finishing touches are a little romance with a sexy art-teacher musician type, a Gandhi quotation, and caricatures of seedy/greedy union reps.

Aside from it being a movie I don’t think I’d want to pay $14 to see (yes, the last ticket I bought in NYC was $14)—and a lot of people felt the same way (it had record-low box office sales)—Won’t Back Down is produced by the conservative Walden Media company and financed by Phil Anschutz, a guy who has a long and sordid history of using his big bucks to fund misinformation campaigns. For instance, Anschutz (from Bold Progressives):

Anyhow, back to the charter school tip. I’m a public school kid through and through. I was privileged to have attended “magnet” (no pun intended) and specialized schools in the New York City public school system. I grew up with arts education, and the school day didn’t have to happen in shifts or in converted supply closets because of overcrowding (though I still couldn’t tell you where the Maldives or Switzerland are on a map).

When I was in junior high, a charter school opened up a few blocks from where I lived. It was the first charter school in the area and I only knew kids from public or Catholic school. From what I gathered, charter schools were small, great schools for kids from all around the city (not necessarily for kids from my own overcrowded working class immigrant neighborhood); had small class sizes and cool extracurricular activities; they weren’t public or faith-based; and you had to win a lottery to get in.

It was only 10 years later during a phone conversation with an organizer from FUREE that I got what the fundamental problem with charter schools is. We were talking about business improvement districts (BIDs) that privatize the running of commercial corridors, i.e. infrastructure and waste management. As with BIDs, to privatize education is to take power out of the community’s hands and into the hands of unaccountable organizations or corporations. Simply put, even the best-intentioned charter schools don’t and can’t change the system.

StudentsFirst, the monster behind this pro-charter “movement” is working closely with the Won’t Back Down crew to leverage its momentum. It has already donated $2 million to the Romney campaign and super PACs and its New York chapter is working closely with NYC Mayor Bloomberg to use a plan developed by Bain & Company that will treat public schools the way Romney’s Bain Capital treated companies.

Scared? You should be. I’ll take this opportunity to plug New Yorkers for Great Public Schools, which came together to combat StudentsFirst NY and their scariness. And remember: Think twice, three, or a hundred times about who’s sitting in the director’s seat the next time you watch a movie.