“When the western people came”

“When the western people first came here, they thought nobody lived on the land because we never hurt the land. If you had a tent or a teepee, you carried all the sticks with you so you didn’t have to cut down a lot of wood. The native people 10,000 years ago, 500 years ago, they had strict rules [to] manage the land and the animal [and] you had to follow because there was nowhere else to get food except from the land.

“We didn’t have money and nobody ever got sick because we lived out on the land and ate our own food. That’s the way it was. ‘Under new management’—that’s what’s really hurting the land now.”

As a child, Cheez Doodles and quarter water was dinner on many a

night. “Fruit” Pies were a staple, as was Pizza Boy pizza (admittedly still the best in the 11372 zip code). I consider myself very lucky though, because I also ate kimchee, soups made from fermented bean pastes, anchovies, rice cakes and other staple Korean foods. My family in rural Korea may still make their own bean paste (dwenjang) in heavy stone urns behind their homes, but in New York, we buy ours from a supermarket, hundreds of miles away from the place it was grown, processed, or killed, like practically everything else we put in our mouths.

Many of our communities have become severed from our traditional foods and subsistence practices. For some of us, assimilation into western lifestyles, the passing of time, or transnational adoption, might be responsible. For others, it might have been slavery, forced migration, and physical or cultural genocide. For the Gwich’in and Koyukon people of Alaska, the threat of severance from traditional hunting and fishing is happening forcefully at this very moment.

It’s a chapter in the centuries-long story of colonialism and violence perpetrated by the U.S. government and corporations against First Nations people. 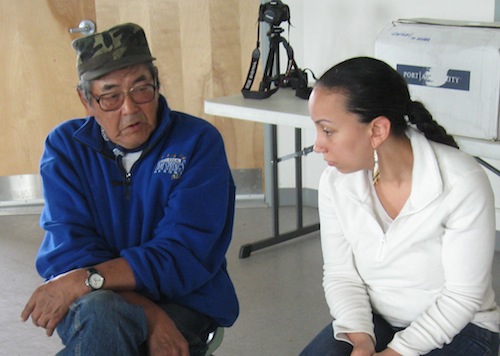 Last week I was in rural Alaska with the Alliance for a Just Society to work with the Council of Athabascan Tribal Governments, a grantee of the Communities Creating Healthy Environments initiative operated by the Praxis Project. We went to work with villagers to develop the components of an organizing and communications plan and collect stories about customary land use, the confusing and impossible policies of state bodies, and increasing harassment of hunters and fishers by enforcement agents those same bodies.

The campaign, Gwinzii Gwarandaii (Living Good), is about protecting the health of traditional lands, waters, and resources that provide the villages’ livelihood.

We interviewed an elder of Beaver, one of 10 villages of the Yukon Flats along the breathtaking and life-sustaining Yukon River. At one point, she gestured to a baby sleeping in a nearby baby carriage and said, “That’s my great grandson. When he grows up, what’s he going to eat?”

This was a central theme to the stories we heard—what does it mean for the health of our community, from our elders, to young parents, to our children and youth? Eating local is often something for the privileged where I’m from. But in the Yukon Flats, it’s a necessity—it’s fundamentally about health, subsistence, and survival.

Editor’s note: Check out another blog post by Alison on how to craft messages using your own community’s powerful stories