What Does Occupy Wall Street Have To Do With Internet Freedom and Media Reform? Everything!

The movement building skills and ability of the Occupy Wall Street Protesters have been a ray of hope for people around the globe. This movement is building in every major city in America, and the mainstream media outlets are finally mentioning the protests. The media outlets that are truly gathering the stories are the independent media outlets such as Free Speech TV, Democracy Now! and independent podcasts like Citizen Radio that are sharing the direct messages of articulate protesters and amplifying their voices.

There are movements beginning, growing and ideas being shared RIGHT NOW that are the seeds of movements. The truth is that the success of these movements are threatened. To protect these movements and the voices of communities in America, we must channel a part of our energies towards creating our own media, supporting independent media and reforming media policy so it serves the public and innovation in America and around the world.

For too long attention to the growing media reform movement has not been high enough on the majority of people’s priority list. With the internet being turned off in Egypt and BART employees in San Francisco turning off the cell phone service in subway stations, more people are realizing that people’s power over communications mediums are slipping away quickly. We can not stand for this. At the same time, those of us with access to internet and mobile device are increasingly connecting with each other, organizing meetups and protests that work to protect quality education, healthcare, jobs and the environment. 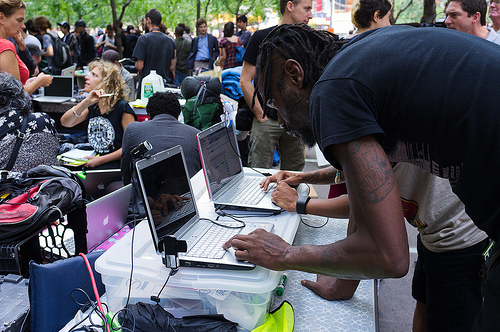 Can you imagine what would happen to the Occupy Wall Street Movement if Americans lost access to internet right now? Access to open communications platforms is critical for the human species evolution and survival.

WE THE PEOPLE MUST RECLAIM OPPORTUNITIES TO TRANSFORM THE MEDIA LANDSCAPE IN OUR COMMUNITIES AND COUNTRIES BY JOINING THE MOVEMENT FOR MEDIA REFORM AND INTERNET FREEDOM.

People around the world must understand that the fight for better media is a fight for survival, because humanity will not evolve, or possibly even survive if we can not listen, communicate and learn from each other. We must be able to share solutions, actions, ideas about sustainability and solutions to economic turmoil including new economic models that will lead to the sustainability of our environment and economy.

At the same time, we as a people need to understand that it’s not only important to create more opportunities to communicate. It’s also critical to be conscious of how we are sharing our messages and how well we are sincerely listening to each other, to truly understand each others contributions without harsh judgement. It’s important that we focus on each other’s strengths to find common ground and build solutions.

I founded Communication is Your Right! (CIYR!) in 2009 and gathered together a great group of CIYR! organizers. Building this campaign has been an excellent way for us to collaborate with individuals and groups around the world that are advocating for open access to internet, as a part of the growing global internet freedom movement. My vision now with Communication Is Your Right! is that it continues to grow as a platform that supports the hard work of communications rights advocates around the world.

The goal of CIYR! is to empower people through the fact that communication is a human right. We also encourage everyone to take a more active role in the media policy making process in your local communities and within your country. CIYR! supports policies that are increasing a diversity of voices in communities and access to communications platforms but also wants to hear from you about the policies your feel are silencing people and controlling access to communicate via internet, TV and radio.

The vision that I see for transformational global communication acknowledges the powerful effects of media policy on communities but also acknowledges our need to evolve and heal in the way we communicate as people with ourselves and each other is possible and necessary.