FCC Chairman Ajit Pai has released an official statement outlining his intent to repeal Net Neutrality this December. In his statement, Pai reveals his plan for a full repeal of Net Neutrality which removes the protections that prevent Internet Service Providers from discriminating against the websites their users can access.

Although this news is disheartening, we are not giving up. We have been preparing for this and have a number of actions planned now and through the FCC’s vote on December 14th.

Help us fight to save Net Neutrality by taking part in one of the actions listed below:

Send a message to Congress telling them that you oppose Trump FCC’s plan to destroy Net Neutrality and ask them to clearly state what side they’re on.

On December 7th, Fight for the Future is coordinating a national day of protest at Verizon stores across the country. Read more about these actions here and visit VerizonProtests.com to get more information about protests in your area. 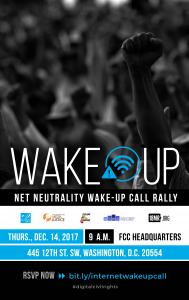 On December 14th, Center for Media Justice in partnership with the Voices for Internet Freedom Coalition is hosting a Wake Up Call Rally outside of the FCC – Let us know you’re coming by RSVPing today!

Click here to read Center for Media Justice’s press release outlining why we’re fighting against this repeal and what Net Neutrality means to our communities.

Use this toolkit to support outreach to your lists – sample email language, social media language, and graphics.

Use this one-pager to talk with family and community members about why a repeal of Net Neutrality is a repeal of our digital civil rights.