¡Wachale! CISPA Moves to the Senate. Why communities of color should care.

Yesterday, the House of Representatives voted to approve the Cyber Intelligence Sharing and Protection Act —a bill that would allow private companies to pass sensitive information and user data (from your emails, Texts, Tweet, etc.) to the government.

Government. Your data. Sensitive information.  Do you hear warning bells?

Let’s break it down. 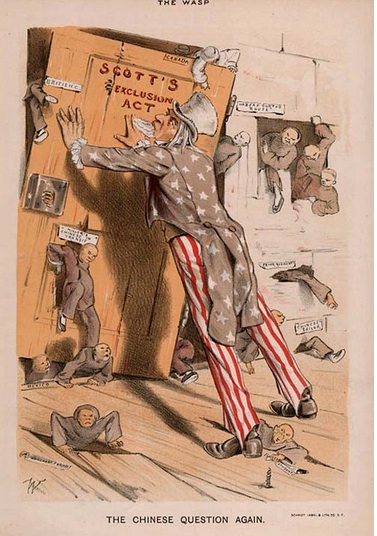 Cartoon from the 1800s. Image: Library of Congress

Cybersecurity doesn’t exist in a vacuum.  In fact, the Department of Homeland Security– one of the more over zealous agencies in our communities–plays a huge role in countering these threats.  And, in a post-911 world, we already have too many real-life examples of what the US government thinks a “terrorist threat” looks like.   But 911 wasn’t the start—the US began using and perfecting the art of racial profiling over 100 years ago.  In fact, the earliest widescale federal use of  racial profiling was the 1882 Chinese Exclusion Act. Bottom line? This nation (I won’t say “our country”) has a long history of using inappropriate or intrusive questions and stereotypes about faith, religion, nationality and politics to create and codify profiles of  “terrorists” while simultaneously extolling the virtues of ‘justice and security.’

For communities of color, migrant and refugee communities we must view CISPA against the backdrop of a national security system that is already deeply racialized. Until the racialized institutional design of this current security system is addressed, we should only expect the same type of profiling—but now extended to the cybersphere.  Sound dangerous? It is!  Our communities must get involved in this fight!

The original plan was for the House to debate the controversial bill on Thursday, and then vote today (Friday).  However, the legislation came to a surprising vote last night, eventually passing in the House by a vote of 248-168.  The House vote now places the responsibility for CISPA with the Senate, which has its own cybersecurity legislation in the works.

Even though the legislation passed, it’s important to understand that along the way CISPA gained a number of opponents—including the Center for Media Justice and Media Action Grassroots Network—as well as a veto threat from the White House.   With the debate moving to the Senate it is more important than ever that our communities stay involved, and increase our involvement.  Without our voices around the table this debate could focus more broadly on “civil liberties”—at the expense of racial justice.  Angela Davis often speaks of “thinking things through together” and CISPA provides another opportunity to apply this practice:  racial justice, racial profiling, security, free speech and civil liberties do not have to be tackled piecemeal.  We can–and should–address them together.