Within minutes (literally) hundreds of news stories hit the Internet, announcing his death.  Most used inflammatory language like “ending 14 years of tumultuous rule,“ or “leaving behind a political crisis”, or my favorite “the socialist leader who assailed U.S. influence in Latin America in his campaign against Capitalism.”  Is there a better way to be remembered? Please let someone say that about me!

Of course I don’t know Chávez personally.  And, I also understand that like most people—and politicians—he was complex, contradictory and flawed.  But that’s the human experience.  What I do know is that for many Latin Americans (myself included) he was a contemporary and constant reminder that América is not synonymous with the U.S.  It was refreshing.  It was bold.  And his declaration that Latin America did not have to follow Washington’s lead broke with nearly a century of U.S ideology that sought to cast the entire Western Hemisphere in the United States’ image.

This wasn’t just melodrama—though it was dramatic—it was real!  This was especially true for those of us who grew up with (or were displaced from Latin America due to) neo-liberal democracy, austerity measures, or thinly veiled foreign policy masquerading as humanitarian aid (Peace Corps, cough cough).  Unlike USAID, the World Bank or the IMF, Chávez spread a message that there were alternatives to development driven by the examples & prescriptions of the United States. 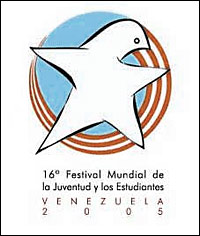 There’s no doubt that his “Bolìvarian revolution” was far from perfect, but it was still powerful.  Literacy courses, health clinics and social programs staffed by thousands of Cuban teachers, nurses and doctors were part of this legacy too.  The impact was real—poverty rates dropped, health indicators improved, and many of Venezuela’s poor were working for the expanding state sector.

I saw this first hand when I was in Venezuela for the 16th World Festival of Youth and Students—a huge conference that drew 15,000 participants from over 40 different countries.  In addition to attending workshops and demonstrations, delegates toured neighborhoods in Caracas, and went on trips to the various provinces. During these tours, local Venezuelan citizens explained some of the new social programs that had been instituted during the revolution—and showed the progress that had been made in their own communities with regard to education and literacy, medical care and housing.

The Festival concluded with a two-day-long anti-imperialist tribunal where representatives from countries that had been victims of U.S. imperialism presented testimony and evidence of the crimes committed against them by the U.S. government.  Chávez wasn’t perfect, but he was charismatic and vocal—and he inspired the possibility of a new way, or what he called “the third way.”

I’m obviously not in Venezuela—but I’ll be thinking of the Venezuelan people–particularly during this transition–hoping that the loss of Chávez doesn’t create the entry point the U.S. needs to ramp up the destabilization programs they’d been forced to keep on the back burner.

In closing I’ll leave you with 2 quotes to reflect on, and one question…

“[Chavez was someone] who gave all his life for the liberation of the Venezuelan people … of all the anti-imperialists and anti-capitalists of the world.” – Evo Morales, President of Bolivia

“Hugo Chavez was a destabilizing force in Latin America, and an obstacle to progress in the region, … “I hope his death provides an opportunity for a new chapter in U.S.-Venezuelan relations.” –U.S. Rep. Mike Rogers, Republican chairman of the House Intelligence Committee

Who would you rather build with?