The Real Scandal: The Price to Phone Home

The articles, which mention CMJ and Media Action Grassroots Network (MAG-Net) partner Thousand Kites, are about the high cost of prison phone calls in Chicago/Cook County. We’re proud to be a part a coalition of organizations heading up the Prison Phone Justice Campaign, a local-to-local campaign challenging prison phone kickbacks and the U.S. Prison Telephone Industry.

Why is this fight important?  Consider some of these stats:

Many of these families are struggling to make ends meet from the jump.  The major hit their incomes take during incarceration is even more devastating.  The bottom line – predatory companies are levying obscenely high charges on the people that can least afford it.

But the costs are not just monetary – for the 2.7 million children with a parent in prison, they now face the uncertainty and alienation that comes with having one or both parents in prison.  For these kids, a phone call with that parent can provide stability, comfort and a sense of normalcy.  On the flip side, for the parent on the other end of the line, that same phone call can offer accountability, and a reminder of the life they have to repair post-release. Healthy family relationships increase the likelihood that people will have success in their communities when they return home.

In my past life, I worked for Safer Foundation – a 30-year old organization helping people with criminal records find employment post-release .  At their two adult transition centers, Crossroads and North Lawndale, the parenting classes offered have the highest rate of enrollment and are the ones inmates report as having the longest lasting impact on their lives.  Through these classes, and the resulting positive interactions they foster with their families, they leave prison more ready to commit to being better parents and better members of society.  The government should encourage this outcome- instead they’re working with corporations to put phone calls out of reach for families trying to stay connected.

Eight states across the country have already said NO to the jail phone contracts bleeding families of the resources they need to survive – we want 42 states to follow suit. This fight is not about “criminals” or “making life easier for murderers” as some may suggest.  This is about protecting families and communities. Together we can force the government to put people ahead of profits. 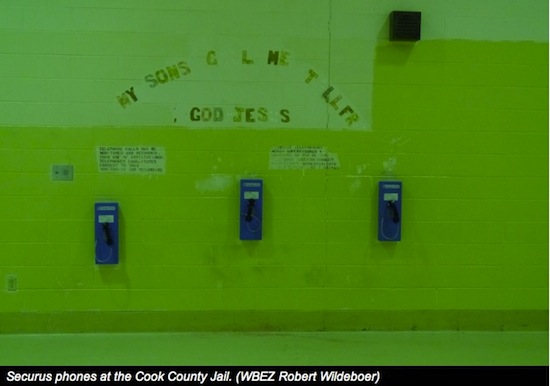