The Narrative Has Never Been “Post-Racial” 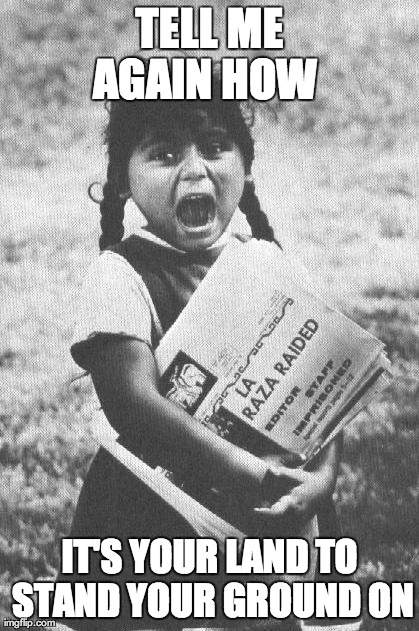 Many the reactions that I’ve read since the Zimmerman verdict argue that it shows we are not ‘post racial,’ despite the contention by many after the election of Barack Obama.

But the narrative has never been post-racial, notwithstanding the use of the phrase by pundits from across the political spectrum.

The phrase’s use is an admission that it’s always been about race.

Post-racial is just an Orwellian remix of the age-old settler narrative that continues to drive culture and policy in the United States. And this nation building and power keeping story carries new weight and meaning amidst a deep demographic shift to a browner, younger country.

‘Don’t worry about it any more,’ says the post-racial pundit. ‘Even though it’s all we worry about.’

Robin D.G. Kelley explained the settler narrative in a viral piece for HuffPo:

Martin died and Zimmerman walked because our entire political and legal foundations were built on an ideology of settler colonialism — an ideology in which the protection of white property rights was always sacrosanct; predators and threats to those privileges were almost always black, brown, and red; and where the very purpose of police power was to discipline, monitor, and contain populations rendered a threat to white property and privilege. This has been the legal standard for African Americans and other racialized groups in the U.S. long before ALEC or the NRA came into being.

Makani Themba put the narrative in a strategic context in her piece that appeared in AlterNet:

Let’s face it. The Zimmerman trial was essentially an opportunity to lay more legal groundwork to advance vigilantism. This is a standard ‘go to’ move in the white supremacy handbook because the vigilante state is particularly important when the “majority” becomes a “minority” as a way to hold power without the pretense of democracy. Unlike Malcolm X in his famous 1964 speech The Ballot or the Bullet, white supremacy works to hold down the ballot and the bullet. It is not an “either or” proposition.

What is most important, however, is the structural analysis and strategy that undergirds their work. Much of our work – in stark contrast – is focused at the level of individual casework. And it’s just not enough.

We often labor under the mistaken assumption that law is created by case history and argued in courts. As a result, the bulk of resources targeted for racial justice work are invested in groups engaged in legal defense strategies. Yet, law is so much more than cases. Law is a fluid amalgamation of principle – ideals like freedom, liberty, equality; public perception and meaning – how we come to understand what principles mean in our current context; code – the nitty gritty words and technicalities that make up how these principles are implemented to and for whom; and coercion and intimidation – we follow laws that don’t work for us because we’d rather not deal with the consequences.

The Right understands the importance of all these elements in the forging of law and social norms. They push for cases that push us on all these fronts. They work to control not only the public narrative but the institutions that shape meaning and teach us what to think about the world and each other. And they defend vigilante and state violence that works to limit our freedom, our mobility and even our dreams of what’s possible for our children. Trying to counter these efforts with law centered strategy is like expecting to beat a card shark at poker – using their marked deck.

Recent national debates– from a renewed attack on voting rights and affirmative action to immigration reform and an attack on public services and institutions to, yes, stand your ground and gun laws – have seen this narrative triggered by reactionaries.

The twist in today’s cultural and economic environment, of course, is that, as the narrative goes, “dark hordes that are coming to get the settlers” are no longer powerless. You know that whole post-racial thing. They even have the administration behind them. (Hey it doesn’t have to be true to carry meaning.)

Every charge of racism countered with the reverse. Every evocative sound bite from the right meant to strike fear into the audience. Seemingly even actions from social justice trigger this fear in the hearts and minds of many Americans.

I thought about how this new twist in the old American story must be confronted with savvy messages that trigger a vision for a hopeful, interconnected future where everyone’s life is valued.

I thought about how there’s an urgent need to continue to fight for the cultural and political space to organize across issue, geography and race, especially when outside forces try to segregate and silo social movements.

And I thought about how if we can break up this narrative, it’s over for the uneasy alliance that is today’s radical right wing