The campaign is a national grassroots project committed to fighting against the exclusive, expensive contracts that levy disproportionately high costs on the families who receive calls from people incarcerated in prison, jail and detention centers.  Our goal is to force the government to act on behalf of the public interest at the state and federal levels.

Since the genesis of the campaign, one thing has become increasingly clear – when it comes to this issue, it isn’t just party-line politics as usual.  So, what is the driving force behind this diverse coalition – which has brought together civil rights organizations, conservative leaders, and media rights and access advocates?

One major driver is a shared outrage in the excessive rates and fees set by prison, jail, and detention phone systems, which cause widespread financial and personal hardship for low-income families, women and communities of color.

How high are these rates? Take a look at this infographic from colorlines.com, which breaks down the pricing for prison phone calls in the state of Arkansas: 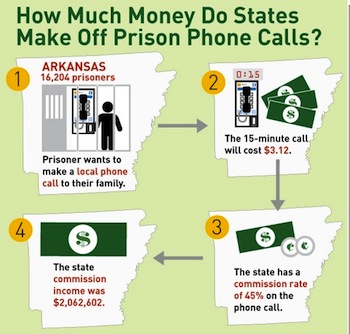 This is just one example of state kickbacks.  Frustratingly, the high rates are not linked to the costs of services.  Instead, up to 60% of the rates of these calls go to “commission” or kickbacks for corporations and states.  But the benefits to states and corporations have come at the detriment of the public interest.  High prison phone calls have left families with insurmountable debt, fractured fragile relationships between children and their incarcerated parent (approximately 2.7 million children have at least one parent incarcerated), and can ultimately undermine the chances for post-incarceration success for those in prison.

Concerns about repercussions that stem from the practice of predatory phone rates have brought groups from left, right and center together to urge the Federal Communications Commission to reform prison phone rates.  The issue has attracted broad support, from conservative leaders such as Gary Bauer and David Keene, as well as civil rights groups such as The Leadership Conference on Civil and Human Rights, the NAACP, the National Council of La Raza, and the National Organization for Women.

Here’s a highlight of a few of the groups that have rallied around this issue: Leadership Conference on Civil and Human Rights, United Church of Christ, and National Organization for Women.

The Leadership Conference on Civil and Human Rights was founded on unique partnerships- literally.  Founded in 1950, the Leadership Conference is a coalition of more than 200 national organizations galvanized to promote and protect the civil and human rights of all persons in the United States.  The original founders were A. Philip Randolph, head of the Brotherhood of Sleeping Car Porters; Roy Wilkins of the NAACP; and Arnold Aronson, a leader of the National Jewish Community Relations Advisory Council. They knew even then that the struggle for civil rights could not be fought and won by individual groups, but through a coalition with a shared vision for social justice.

For the Leadership Conference, the fight for phone justice is, in part, about lowering the recidivism rates, which is over 50% nationally.  “The whole point of incarceration is to punish and rehabilitate so the offender can resume his or her life as an upstanding, productive member of society upon release,” says Wade Henderson, president and CEO of the Leadership Conference. “One way to ensure this is to encourage prisoners to keep their relationships with loved ones on the outside, for moral support, and a safety net to help them readjust to life after being released.  But many prisons don’t view these precious relationships as rehabilitative or lifesaving – instead, they view them as revenue generators – ways to pad their bottom line.”

The United Church of Christ

The United Church of Christ (UCC) was formed in 1957 with the union of two Protestant denominations: the Evangelical and Reformed Church and the Congregational Christian Churches.  The UCC is a denomination of 5600 churches and 1.2 million people.  Over the decades they have been on the front lines fighting on issues of inclusivity and justice, more recently being the first church to publically affirm same-gender marriage equality.

For religious leaders involved in the fight for phone justice, such as those at the United Church of Christ, they’re answering to a higher call.  “Predatory prison phone rates are a moral issue for the United Church of Christ.  It is simply unpardonable to make it more difficult for pastors and loved ones to communicate with those in prison as a means to finance the cost of incarceration,” says Cheryl Leanza, Policy Advisor at the UCC.  “Jesus instructs us not to forget those in prison.  We hope that reducing these costs will offer incarcerated individuals a lifeline to a better life once they are released.”

Currently, 75 percent of incarcerated women have a child under 18 years of age, and women, on average, are imprisoned 160 miles away from home.  Being able to call home is crucial to both mothers and their children.  This is particularly important when you consider that most imprisoned mothers were the primary caregivers of their child/ren prior to incarceration. For decades, National Organization for Women has focused on media content, ownership and employment.  But most recently, the disproportionate impact of prison phone rates on women, people of color, immigrants, and low-income communities, has moved NOW to join the fight for prison phone justice.

“Women, low-income people and people of color are all unduly burdened by steep prison phone rates,” says Lisa Bennett, NOW Foundation Communications Director. “In addition, excessive phone charges undermine the economic security of family members who shoulder the costs of these calls — disproportionately mothers, sisters, wives and girlfriends. Imagine a grandmother worried about the incarcerated grandson she helped raise. Or a child growing up with a mother or father in prison. Trying to preserve family bonds while a member is in prison is hard enough already, and exorbitant prison phone rates only make things that much harder. The practice has gone on long enough and needs to be stopped.”

Special thanks to Corrine Yu, Managing Policy Director of the Leadership Conference, for helping to compile quotes.