When Donald Trump promised to put refugees through a higher degree of “extreme vetting” as part of his Muslim Ban, it wasn’t just a figure of speech. Immigration and Customs Enforcement (ICE) are planning to create actual tools that will make it easier to discriminate against and deport immigrants – and they’re recruiting tech companies to help them. 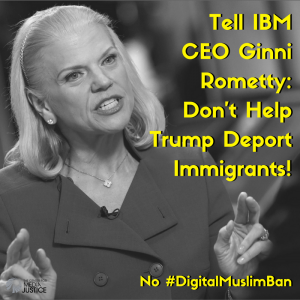 ICE recently hosted an event for dozens of companies interested in building software that will automatically screen immigrants — including through aggressive social media monitoring (1). One of the companies at the event was IBM, one of the country’s leading tech companies.

ICE wants this extreme vetting system to predict if an immigrant will become a “positive member of society”, “contribute to the national interest” or intend to “commit a criminal or terrorist act.” If those broad terms mean nothing to you, you’re not alone. Some of the nation’s top data scientists agree that it’s impossible to create software to fairly evaluate anyone based on these standards (2).

IBM is a company that prides itself on its image as a global company that supports immigrants. Following Attorney General Jeff Sessions’ announcement repealing DACA, the company tweeted a statement of support standing by their “IBM #Dreamers” (3). Their CEO, Ginni Rometty, even flew to Washington D.C. to lobby Congress to save DACA.

But IBM’s actions haven’t always followed their stated values. They were one of the companies that ignored pressure to resign from Trump’s Strategic and Policy Advisory Council following the Muslim Ban. They remained on the council despite Trump’s shameful response to the deadly neo-Nazi attack protest in Charlottesville, VA (4). IBM finally left the council — when it was disbanded by Trump.

IBM needs to stop the lip-service and stand up to Trump and his administration’s plans to discriminate against our communities. That means not helping agencies like ICE build racist tools that marginalize immigrants.

1. Sam Biddle and Spencer Woodman, These Are The Technology Firms Lining Up to Build Trump’s “Extreme Vetting” Program, The Intercept, August 7, 2017

4. David Gernon, As Trump disbanded advisory groups, this is who was in and who was out, CNBC, August 16, 2017