“Stories can conquer fear, you know. They can make the heart bigger.”

Last week I traveled to Washington D.C. to lead the 10-person #KeepUsConnected Delegation. Over the course of two days we met with members of Congress and the Federal Communications Commission to bring them the stories of families who are on the wrong end of the digital divide. We were also there to lend our support for a federal program known as Lifeline, that may soon help low-income families afford Internet access at home. Hosting delegations is something I’ve done a lot in my four years at the Center for Media Justice, it’s almost second nature.  But all of that history could not have prepared me for the transformational experience this delegation would become.

To see what our #KeepUsConnected Delegation did in Washington D.C. check out our storify.

There was something slightly different with this delegation.  Because the issue we were trying to address is the digital divide, bringing people who experience this first hand was critical.  The delegates we brought to Washington D.C. reflected the diverse reality millions of people face in trying to get online.  We had students whose grades fluctuate based on their Internet connection.  We had a senior who has to depend on public spaces for Internet in order to stay in touch with family near and far.  We had a mother who can’t afford Internet at home for her kids even though they desperately need it for school.  These stories are often reflected in research reports and studies.  But statistics don’t tell the whole story.

Bridgid Skiba is a student at a college in San Francisco.  Getting homework done is a daily challenge for Bridgid because she doesn’t know where she’ll be able to access the Internet from. The public library closes by 6pm and school facilities close at 6:45pm each day making public Internet access a challenge.  The rest of the day she has to walk around areas of San Francisco looking for open portals that will allow her sufficient enough connection to finish up her homework.

“I can go everywhere for Internet to finish my homework except for home,” said Bridgid during the trip. It’s an experience another one of our delegates shared completely. Chivona Roberts from Jackson, MS can relate to traveling from one place to another searching for an open Internet connection.  Chivona works at a local high school, is a college student and a mother of two.  “For me, a mother trying to finish my college degree while raising two children, having Internet at home isn’t a luxury, it’s a necessity,” said Chivona.

Many evenings she’ll find herself huddled up at the local McDonalds on their WiFi trying to wrap up assignments and research for school. She can’t afford Internet access at home. The majority of the students she works with only have Internet access at school.  She was able to relay this story in person when she met with her Congressional representative Bennie Thompson.

Thompson has been a champion for Lifeline because he knows the challenges people like Chivona face in his district trying to stay connected.  He’s not the only champion in Washington D.C.  Our delegation had a chance to meet with FCC Commissioner Mignon Clyburn.  She led the efforts within the Commission to make the cost of prison phone calls affordable and championed pushing through the most recent reforms for Lifeline.  Every delegate we brought on the trip really enjoyed meeting Commissioner Clyburn.  Especially Lillian Tillman from New Orleans who had a chance to personally thank Commissioner Clyburn for her efforts on prison phones as she’s a mother with a son who’s incarcerated over 10 hours away from her home and depends on telephone calls to stay in touch.  She’s also a Lifeline subscriber and while she currently uses the phone to stay in touch with her son, the Internet has become a critical tool to help her son. 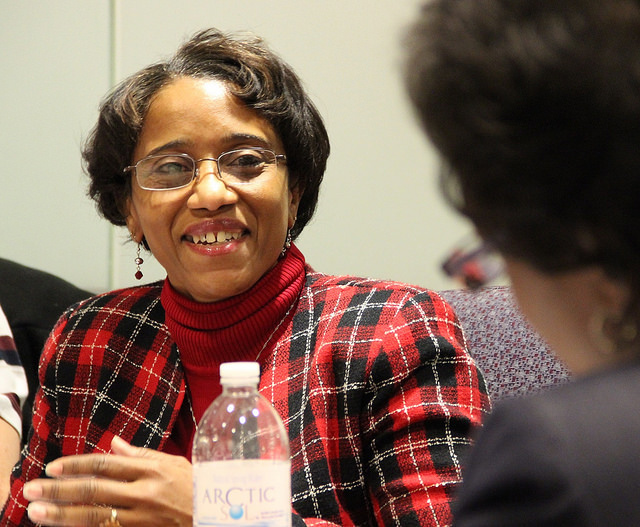 Lillian is in college, studying criminal justice in large part because of her son’s incarceration.  She takes online courses and uses the Internet to research articles and resources that might be helpful for her son.  Like a lot of folks from New Orleans, Lillian was affected by Hurricane Katrina in 2005.  She was displaced from the city for a few years and had to rebuild along with the rest of New Orleans.  She shared how critical the Internet has been to her rebuilding process but knows that many people in her city face challenges daily in getting connected. According to research done by the National Digital Inclusion Alliance, New Orleans is among the worst cities in the U.S. for Internet connectivity at home.

“There are families like mine, struggling families, who have to choose between paying the high cost of Internet or paying to travel ten hours to visit my son in prison,” said Lillian during the delegation. “That’s a choice no mother should have to make.”

A theme of this delegation were the tough choices that our delegates have to make on a daily basis because of the Internet.  One of our delegates, Darrell Coker from Eastern Tennessee had to give up school after his mother suffered an accident that required she receive 24/7 homecare.  Without Internet access at home pursuing his education is temporarily on hold.  But Darrell isn’t sitting around waiting for things to change.  He’s actively working as part of a state task force to overturn laws that prevent cities from building their own broadband networks.  Tennessee is home to some of the best city-owned Internet in the country but those networks can’t build out in rural communities because a state law prevents them from doing that.  These “broadband preemption” laws as their known, were passed in several states thanks to the lobbying from big cable companies like Time Warner Cable. 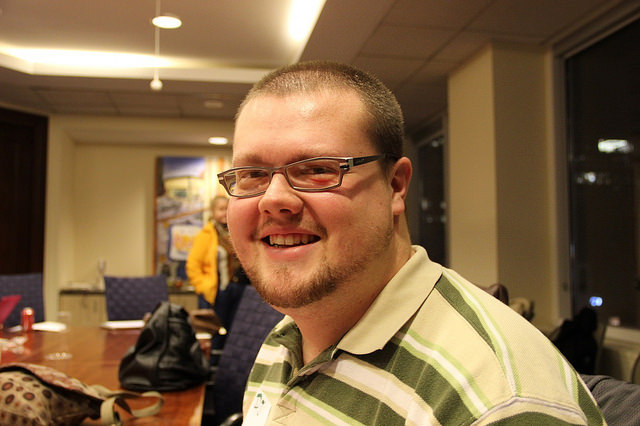 Darrell had a chance to share his story in front of the FCC and Congress and really appreciated the opportunity to do so. “My voice doesn’t get heard as much at home as it did here, it’s been an awesome experience,” said Darrell on the last day of the delegation.

The Lifeline program can help close the Internet gap for the delegates that came on this trip.  One of our delegates, Connie Freeman from Philadelphia, knows how vital Lifeline can be to keeping her up to date with the latest technology. “Lifeline brought the cell phone–a new technology–into my life,” said Connie.  “Modernizing Lifeline to support affordable Internet access would help seniors like me stay healthy and connected to the outside world.” 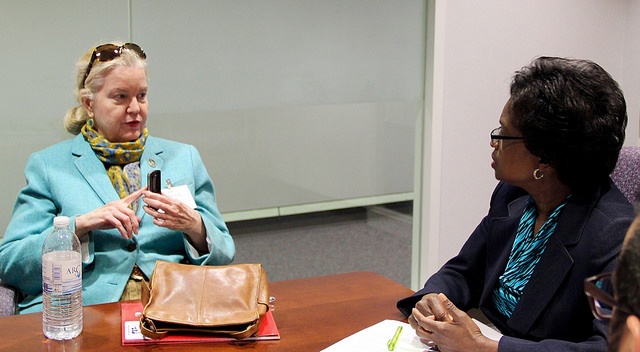 Shortly after the delegation, the Federal Communications Commission put out a statement outlining their proposal to modernize the Lifeline program.  They will vote on these reforms on March 31st.

I felt honored and humbled to bring these stories to Washington D.C. so that they could be heard by people who can make a difference.  For the delegates, everyone experienced many firsts on this trip.  First time flying, or in a taxi, walking through the halls of Congress, testifying in front of an elected official and even eating at a food truck (true story).  They were all so excited to be there and naturally there was fear about sharing their stories.  That fear went away as you got to know this delegation. Bridgid summed it up nicely when she said, “I never knew that I could have a voice at this level. For the first time in my entire life I felt represented with you all. You said tell my story, it’s my life, and I knew I could handle that.”

What I learned through this trip is that Internet access isn’t just about new opportunities or a better way to communicate.  Through this delegation’s stories I learned that the Internet is about the connection we need to improve our lives wherever we may be at.  Whether that’s to get a degree in order to get a better job or to help out a son in prison, the Internet is a Lifeline that we all deserve access to. 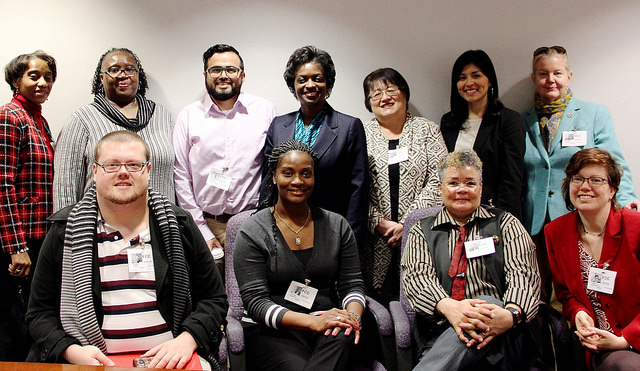 Sign this petition if you want to support our campaign to modernize the Lifeline program to help close the digital divide!