On August 1, the Alameda County Board of Supervisors, which has been under fire for several years over the police militarization expo Urban Shield, took its first action to enforce 12 reform principles the Board embraced in January of 2017, four months after two dozen people were arrested at the 2016 expo.

After being notified only hours before the meeting by MA executive director Tracy Rosenberg and American Friends Service Committee Wage Peace Coordinator John Lindsay-Poland of extreme racial stereotyping on the website of Urban Shield vendor Strategic Operations of San Diego, the board of supervisors refused to authorize the use of the vendor. Alameda County Sheriff Gregory Ahern’s request to contract with Strategic Operations for $45,000 in “hyper-realistic training” for the 2017 Urban Shield event failed for lack of a motion, with none of the five supervisors willing to support the request. Supervisor Keith Carson removed the item from the board’s consent calender. Supervisor Richard Valle indicated he would not vote for it and Board President Wilma Chan also spoke in opposition. 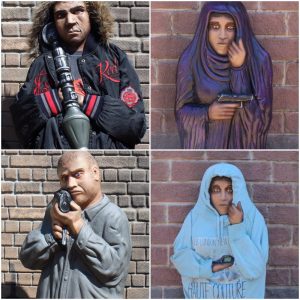 MA ED Tracy Rosenberg, the only public comment speaker on the item, commented: “Strategic Operations promises to provide “battlefield immersion.”  The Bay Area is not a battlefield. Law enforcement agencies are not at war with Alameda County. The images above are described as humanoid live action targets and are available in a catalog on Strategic Operations’ website that asks the buyer to “choose the skin tone” of their target from three available choices: brown, browner and black. This kind of blatant racism does not reflect Bay Area values”.

San Diego’s Strategic Operations’ website is located here. The images above can be found here. Their description of the “Hyper-Realistic Training” they provide is:

“Strategic Operations Inc. (STOPS), defines Hyper-Realistic™ as “such a high degree of fidelity in the replication of battlefield conditions in a training environment that participants so willingly suspend disbelief that they become totally immersed and eventually stress inoculated. STOPS uses all the techniques of the theater, TV, and film industry – “The Magic of Hollywood” – to enhance live training in a way that is unique in the world. However, employing Hollywood techniques is not enough. Two additional ingredients are necessary: The first is an understanding of and expertise in, military tactics, techniques, and procedures.And most importantly, add to this mix all the proprietary techniques, methods, procedures, and ideals that enable the effect to be not only extremely realistic, but dynamic, interactive, and repeatable. Large numbers of military personnel can experience combat conditions in a training environment that truly reflects real world conditions, but in a controlled, duplicatable, and dynamic setting”

The live target catalog is available for download from the site and can also be downloaded below, including the below image: 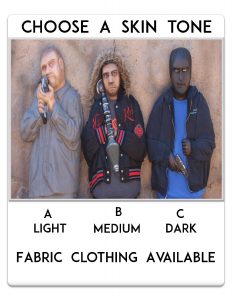 The full product catalog can be downloaded below.

Sheriff Ahern’s request to the board for a $45,000 grant to STOPS for “Hyper-Realistic Training” for Urban Shield can be found here.  A sole-source contract is requested since there is stated to be no other “qualified vendor”.

An Alameda County Sheriff Department staffer stated that the Department was not purchasing humanoid targets from Strategic Operations for use during Urban Shield, but was purchasing make-up, role players and pyrotechnics.

Nonetheless, the request was vetoed. Supervisor Keith Carson indicated he had become aware of the proposal via an email he read early in the morning on the day of the meeting that contained the disturbing images above and visited the vendor’s website. Supervisor Wilma Chan clarified that the 12 reform principles for Urban Shield developed for Urban Shield as a contingency on 2017 funding included excluding racist vendors. Supervisor Richard Valle then indicated he would be unable to vote for the contract and reiterated the agreement with the Sheriff to exclude racist vendors from the Urban Shield event. With no supervisor making a motion to authorize the contract, the purchase did not go ahead.

The Board of Supervisor’s contract veto constitutes the first concrete change to the Urban Shield event seven and a half months after the Board of Supervisors which oversees the annual event developed the 12 principles and convened a large task force to review the event and implement the reforms.

In June of 2017, the City of Berkeley debated withdrawing from Urban Shield due to excessive militarization and racial profiling in a contentious meeting that ended with a police riot after protestors unfurled a banner. MA director Rosenberg wrote about that meeting here.