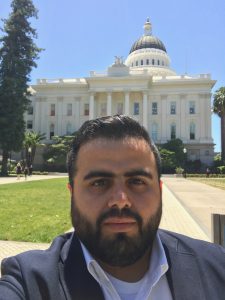 This afternoon in Sacramento, CA, our Organizing Director delivered a version of the following words during a hearing on California’s net neutrality bill, SB 822:

Members of the Privacy and Consumer Protection Committee, I’d like to thank you for giving me an opportunity to offer some remarks today. My name is Steven Renderos and I’m the Organizing Director at the Center for Media Justice. The Center for Media Justice is an Oakland-based racial justice action center that fights for the digital rights of poor people and people of color in the United States. We host the nation’s largest racial justice network for media, technology and cultural change. We have 100 member organizations across the country with 21 of those based here in California.

The Center for Media Justice and our network members have advocated for Net Neutrality for the last 10 years, including fighting for the strong protections in the 2015 Open Internet Order. As this committee is aware, those protections were rescinded on June 11th by Trump’s FCC, which is why I’m here today. Before it was gutted last week, SB 822 would have brought back those same open internet protections for Californians. I am here to urge this committee to move this bill forward and support all efforts to restore the original protections in SB 822.

I come not just as a long-time advocate, but as someone who embodies the promise of an open Internet. As the child of Salvadoran immigrants, raised by a single mother in Koreatown in Los Angeles, I know the value of opportunity. My mom worked a subpar job, spending 25 years as a garment worker. Her wages only afforded us subpar housing, a 1 bedroom apartment shared with another family. I attended a subpar elementary school which to this day is rated below average in the state. My mother shopped at a subpar grocery store with meats and vegetables nearing their expiration dates.

But I was afforded opportunities others in my neighborhood were not. I went from attending a bad school to one of the best schools in the country. Thanks to my mother’s sacrifice I was the first person on my block to have a computer with Internet access. I then became the first person in my family to attend college.

I know what it means to live a second class existence. But I also know how powerful the Internet can be to overcome structural barriers to success. The Center for Media Justice fights for Net Neutrality, not because we care about what happens to bits and bytes, but because in the 21st century, Net Neutrality is a civil rights struggle.

For those outraged by the separation of immigrant families, the Internet is where they channel outrage and move politicians to act. For Black activists tired of seeing unarmed Black bodies being killed by police, be it Stephon Clark here in Sacramento or Antwon Rose in East Pittsburgh, the Internet allows them to document this violence and seek justice. For members of queer and trans communities, the Internet is one of the few safe spaces to connect to one another.

Before it was amended, SB 822 comprehensively protected marginalized voices. But I need to highlight a protection in the original bill that is crucial to the Center for Media Justice. SB 822 would’ve eliminated the most egregious forms of an often discriminatory practice known as “zero-rating”. These harmful zero-rating schemes push Internet customers to use the websites and applications chosen by their Internet Service Provider (ISP) and in exchange customers are not charged for the data they use on those websites. ISPs incentivize customers to use their chosen websites by keeping data caps low and unlimited data plans expensive.

Some argue that these zero-rated plans are good for communities of color. I say that discrimination of any form is never good for people of color. Plans like AT&T’s zero-rating of its cable-TV service, DirectTV, are dangerous because they create a second class experience online and make it harder for our voices, which are not on DirectTV, to be heard. My cousin, an AT&T customer, routinely runs out of data every month due to overpriced data plans with artificially low caps. In countries where self-serving zero-rating schemes are banned, data caps go up and unlimited plans become cheaper.

Communities of color and low-income communities deserve an equal experience online. Feminist theorist, bell hooks, once said that “when you are thirsty, you want water. It does not matter in that moment whether it’s dirty or clean. Our job is not to carry dirty water. It’s not to ask communities to choose between a drink or thirst.” An Internet where an ISP’s own content is zero-rated but our voices are not, is dirty water. It is my job as an advocate and your job as leaders in this state to ensure that the Internet the residents of this state have access to is clean, open and abundant. I urge this committee to move SB 822 forward and fight to bring back the critical protections removed last week. Thank you.