Smarmy or Smarty: Presidential Debate Tactics for the Movement

I am generally not one for electoral politics, but I felt the need to write on the presidential debate this week. In addition to sharing my conclusion that President Obama will always win on handsome-points, I thought this would be a good opportunity to talk about pivoting and some other tactics that, despite the sometimes dirty history of their use by unscrupulous politicians, can be effective communications tools for changing hearts and minds for social justice.

According to Brett O’Donnell, a consultant who trains Republican candidates like Mitt Romney, pivoting is “a way of taking a question that might be on a specific subject, and moving to answer it on your own terms.” Romney used pivoting during the debate to deflect criticism, evade direct responses, and turn a topic into an offensive attack. So you might be thinking, “Well, isn’t that kind of shady?” Not necessarily. So long as you’re not making outright lies (see here and here, pivoting can help you use an opponent’s question intended to derail the conversation and make you flustered to: 1) acknowledge their point, and 2) redirect attention to the real issue.

You can sometimes do this simply by using pivot phrases, like “I can see what you’re saying, but I think the real issue is…” or “That’s an interesting point, but what I think it’s important to note that….” When Fox Business News interviewed Take Back the Land’s Max Rameau, the first question they asked him was “Is this legal?”

Rameau successfully diverted attention back to the core work of TBTL by saying “ Well I’m not a lawyer so I certainly don’t want to give any legal opinion, so our primary concern is not the legality of it but the morality of it. The reality is there are large numbers of people right now who don’t have a place to stay, human beings who don’t have anywhere to live.” Check out this spokesperson tip sheet from Center for Media Justice.

Another tactic that helps when speaking publicly is self-deprecation with a sense of humor. President Obama did a great job of this last night: “You know, four years ago, I said that I’m not a perfect man and I wouldn’t be a perfect president. And that’s probably a promise that Governor Romney thinks I’ve kept” and “I have become fond of this term, ‘Obamacare’.” Poking fun at something can also be successful at undermining its very power. And, laughing at yourself using things that other people have laughed at you about makes light of the situation and it may turn a point of vulnerability into a point of identification for your audience—simply put, it can humanize you and make you more likeable. 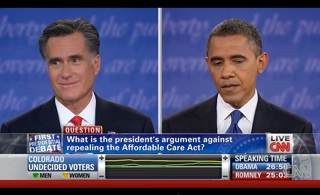 Personalizing a message in any way is a surefire way to make an impression. Both President Obama and Romney did a good job of this. President Obama opened up the night by talking about Michelle Obama’s and his wedding anniversary; Romney brought people to fuzzy home imagery with “an economic crisis at the kitchen table” and talked about his “five boys” (ironically to stress that he is used to “people” repeating the same lie over an over again—another very effective technique that he employed around the Affordable Care Act; and both told stories about “regular Americans” to put a face on and gain sympathy for their respective plans.

(Side Note: You might also choose to appropriate quotations from famous people, like when Romney said “You’re entitled, Mr. President…to your own airplane and your own house, but not to your own facts,” evoking the politician Daniel Patrick Moynihan who said about welfare that “a community that allows a large number of men to grow up in broken families, dominated by women…asks for and gets chaos [and] it is richly deserved.”)

It’s important to note the route each debater chose to follow in his closing remarks. We all know that just one simple word or a combination of simple words can make you swell up inside or make you tight with fear—and sometimes we’re not even sure why. These include: children, chronic unemployment, rising income, 12 million new jobs, dramatic cuts, military, losing, commitment, strong, strong middle class. Romney’s closing was essentially a cluster bomb of these value words and phrases. And, while critics all around have given President Obama bad marks for his debate performance, I thought he closed the night beautifully. President Obama pieced his remarks together in a cohesive narrative that segued from education, to corporate responsibility, to employment, to energy, jobs, and the middle class—and all this grounded in a story about a woman in North Carolina.

Telling a simple story is sometimes all it takes.