Perhaps you’ve seen the white women wearing colorful knitted face masks in Times Square, or outside of Russian embassies from here to Berlin, or pictures of masked faces on nighttime building facades.  Maybe you’ve heard about charges of “hooliganism motivated by religious hatred” on Facebook or mainstream media.

The three members of the Russian punk group “Pussy Riot” – Maria Alyokhina, 24, Yekaterina Samutsevich, 30, and Nadezhda Tolokonnikova, 22 – who were sentenced to two years in prison (probably in Siberia) for an anti-President Vladimir Putin stunt in a Russian Orthodox church 5 months ago have created quite a stir among the more visible liberal to progressive pundits.

The global political and social discourse that is rippling out from this case is infinite, and I’m not quite sure where to begin. So, instead, I’ve compiled some excerpts from various media coverage about Pussy Riot below, organized into loosely constructed categories. I would love to hear your thoughts.

From The Atlantic and Joshua Foust: “Focusing on the spectacle of Pussy Riot actually obscures the real issues that prompted their trial in the first place. Pussy Riot are not peasants grabbed off the road and put on trial for being women — they are rather famous (at least in Russia) political activists who got arrested for political activism. That is a horrible, ludicrous thing for Russia to do, but making them into innocent everymen misunderstands both their actual efforts and why they matter. Pussy Riot are part of a larger movement within Russia to demand political freedom, one that Putin’s regime thugs are literally, physically beating back. American celebrities are right to be outraged about Pussy Riot’s treatment, but it’s a shame that so few seem to have investigated what happens to the activists who aren’t Western media darlings for their all-women punk bands with sexually suggestive names. Rather than the Pussy Riot trial catalyzing a broader Western awareness of Russian authoritarian backsliding or even a popular movement to pressure Moscow to loosen its restrictions, it seems to have inspired little more in the West than outrage about how sad it is for some punk rockers to go to jail for a silly little church concert.”

From Al Jazeera and Mark LeVine: “I’m sure the members of Pussy Riot were thrilled that Madonna wore a balaclava in their honour at her Moscow concert, and that Red Hot Chili Peppers donned Pussy Riot t-shirts at their Russian concerts (we’ll see if the Chilis show a similar concern for Palestinian prisoners – including artists – when they perform in Israel). But, globally, there are hundreds of artistes under far greater threat to their freedom and lives who deserve the same attention.”

From The Atlantic and Chauncey Hollingsworth: “Joseph Brodsky was a poet and writer who, like Pussy Riot, was brought before Russian (then Soviet) authorities in the mid-1960s for charges of “malicious parasitism.” After five years of hard labor, he was kicked out of the USSR and ended up in America, where he was eventually awarded the Nobel Prize in Literature and was appointed United States Poet Laureate. Perhaps fate and history will treat Pussy Riot just as well.”

From the Guardian UK and John Harris: “The heritage of protest and provocation on which Nadezhda Tolokonnikova was drawing was confirmed as soon as I saw her picture. The hair cut into a functional bob, the “No Pasaran” T‑shirt with the clenched-fist logo, her leading place in a band-cum-collective called Pussy Riot – it was as if she had been plucked from the Anglo-American subculture known as riot grrrl circa 1992, and dropped into modern Russia.” 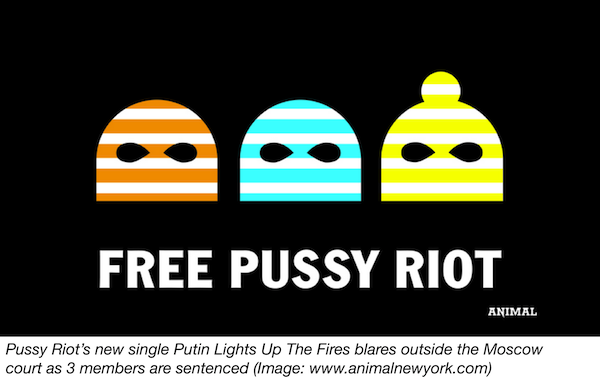 The Privileging of Outrage

From the Sydney Morning Herald and Clem Bastow: “The sight of a beautiful young white woman staring down a prison sentence is, for many, an abject tragedy. Compare that with the media attention given to coloured women or transgender women who have recently faced similar predicaments. Take, for example, Chrishaun ”Cece” McDonald. The 23-year-old was recently sentenced to 41 months in prison for second-degree manslaughter in the US. When she and her friends were subjected to a tirade of racist and transphobic abuse from a group of white men, a fight broke out and one of her attackers was stabbed and later died…she’s now serving her sentence in the men’s prison in St Cloud, Minnesota. McDonald’s case received little mainstream media attention, and far fewer outraged blog posts by white western feminists than Pussy Riot have inspired.” 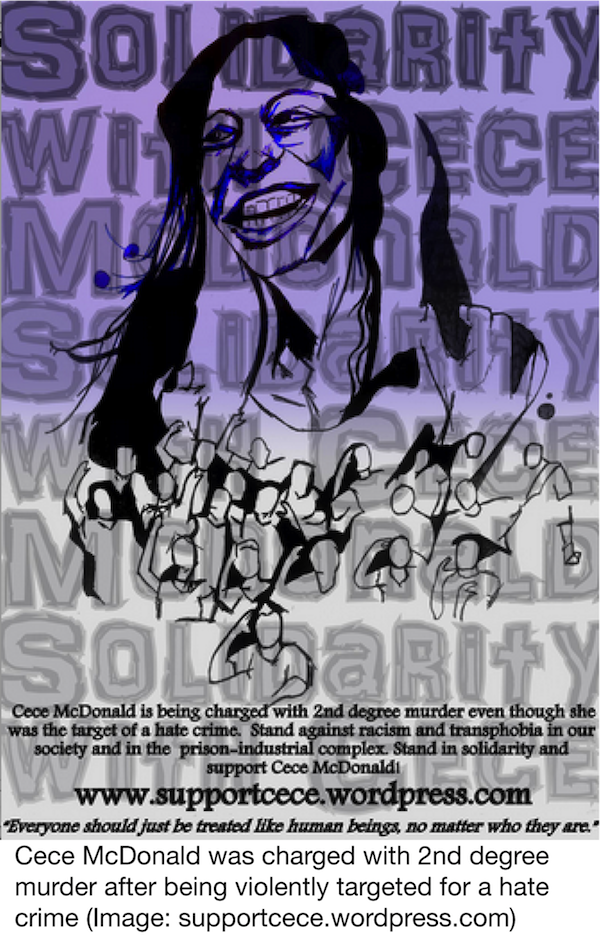 From the Guardian UK and Carole Cadwalladr: “They’re now going to pay the price. Russian women’s prisons are even harsher than the male ones. The women have been depicted on state television as evil satanists and their lawyers fear for their safety. It’s unlikely they’ll stay in Moscow; like Khodorkovsky, they’ll probably be shipped off to a far-off prison in Siberia away from family and friends, from their young children. It’s not a joke. It’s a brutal, nasty place, Putin’s Russia. And because of Pussy Riot, we all now know that now.”

From the Guardian UK and Miriam Elder: “Tina Kandelaki, a prominent media personality and Putin cheerleader, called the verdict and sentence “information suicide” and “wrong at its very roots”. “For some reason, from the very beginning, Putin’s advisers gave the president a new ‘Khodorkovsky’,” she said, referring to jailed oligarch Mikhail Khodorkovsky, whose arrest in 2003 signalled Putin’s willingness to jail political critics, say critics. “The millions of dollars of taxpayer money spent in the last few years on fixing the image of our country abroad have been thrown to the wind,” she said. “Our image in the eyes of the world is getting closer to a medieval dictatorship, although in reality we are not that.” 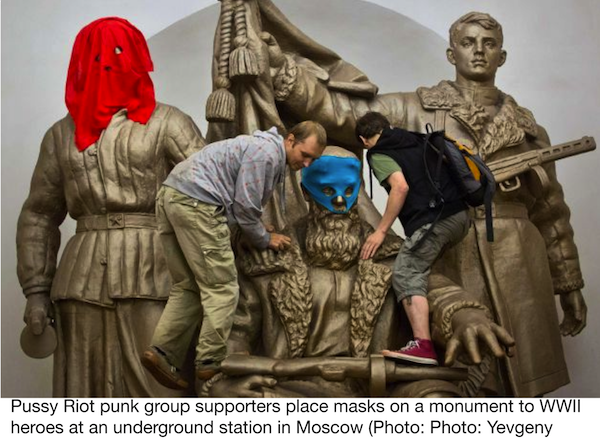 The Lyrics That Did It

Black robe, golden epaulettes
All parishioners are crawling and bowing
The ghost of freedom is in heaven
Gay pride sent to Siberia in chains

Church praises the rotten dictators
The cross-bearer procession of black limousines
In school you are going to meet with a teacher-preacher
Go to class – bring him money!

Patriarch Gundyaev believes in Putin
B*tch, you better believed in God
Belt of the Virgin is no substitute for mass-meetings
In protest of our Ever-Virgin Mary!