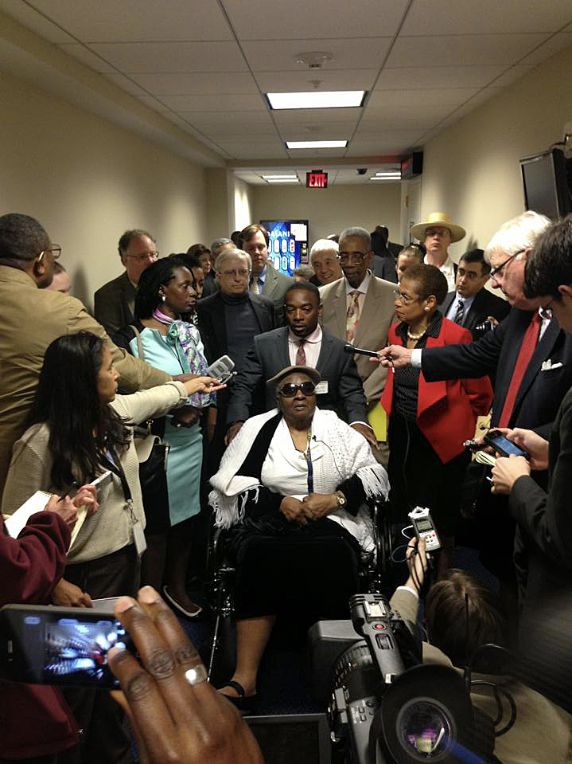 Among those incarcerated people was Mrs. Martha Wright-Reed’s grandson, who would be transferred to a correctional facility in Arizona, 2000 miles from her home in Washington DC. He would ultimately cycle through several other facilities throughout his incarceration. As a blind elderly woman, who could neither write letters nor travel such long distances for in-person visits, a phone call was her only option to stay in touch with her grandson.

To Mrs. Wright-Reed’s surprise, calling her grandson out of state a few times a month turned out to be expensive. In addition to high per minute rates, Mrs. Wright-Reed was subjected to paying various fees that added up to hundreds of dollars a month. She understood that if she was struggling to afford paying for these phone calls, it was likely other families were struggling to. A couple years later, she decided to do something about it.

In 2000, Mrs. Wright-Reed sued the Corrections Corporation of America, which had exclusive contracts with several telephone companies—including Global Tel Link and Securus—for pricing prison phone calls at exorbitantly high rates. After the D.C. District Court system decided the case was out of their jurisdiction, it was referred to the Federal Communication Commission in 2003.  For the next ten years, Mrs. Martha Wright-Reed would continue to fight for affordable prison phone rates to stay in touch with the grandson she raised and loved.

Her personal battle highlights the ways in which predatory prison phone rates are a gender justice issue, uniquely impacting women. Furthermore, her leadership has paved the way for other women impacted by the crushing high rates of prison phone calls to advocate for better rates to stay in touch with their loved ones.

The Campaign for Prison Phone Justice and Mrs. Martha Wright-Reed were recognized in 2013 by the Multicultural Media, Telecom and Internet Council, introduced here by FCC Commissioner Mignon Clyburn.

Thanks to Mrs. Martha Wright-Reed’s perseverance, in 2013 the FCC finally approved capping rates for interstate (long distance, out of state) prison phone calls to 21 cents per minute from both prison and jails. Before this victory, a long distance prison phone call to California could be as much as $17 for 15 minutes. After this victory though, that same prison phone call would cost only $3.75 .  The FCC also eliminated many other abusive fees, such as connection fees that added additional charges to the rate of a phone call.

This year, the fight for Prison Phone Justice continues. Most of the incarcerated population remains in state-run facilities, which means families are still vulnerable to excessive prison phone rates when calling someone incarcerated within their own state. Though Mrs. Martha Wright-Reed passed away in 2015, this pioneering Black woman’s legacy lives on. We need Congress to act and support the legislation which has been introduced by Senator Tammy Duckworth—now officially named the Martha Wright-Reed Just and Reasonable Communications Act of 2019—that would restore the FCC’s authority to regulate intrastate prison phone rates and fees. It’s the Wright thing to do.