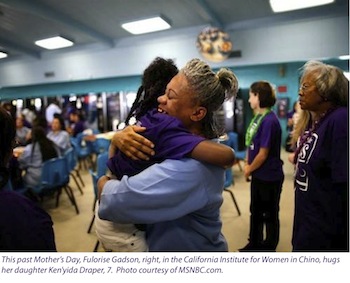 This past Mother’s Day weekend, Center for Media Justice and our Prison Phone Justice partners, called for a Mother’s Day Action. The Action calls for families to send electronic postcards to the Federal Communications Commission (FCC) urging them to take action of the “Wright Petition”.

All around the Internet we saw activists, advocates, and everyday folks just trying to stay connected to their loved ones, sharing their stories and spreading the word about the campaign.

Thanks to all of you – we were able to send the FCC a strong message: mothers and families cannot afford to call and connect to their loved ones – it’s time to stop prisons’ predatory phone rates.

By the end of the action we collected close to 700 postcards for the FCC and over 150 people downloaded our Prison Phone Justice Toolkit so they could start organizing their communities and fight back against high prison phone rates.

But it was hearing your stories that really drove home how important this fight is.  Over the course of the four-day action, we read stories from mothers that hadn’t spoken to their child in months because of the costs to accept a collect call or make a phone call to them.   We heard stories from people who have come home from prison and have worked hard to stay out of prison for the sake of their families.  We saw stories of the advocates and activists who have been steadily leading the fight for prison phone justice for years.

Thank you for sharing your stories with us!

But the fight is just getting started.  This Friday, May 18th, at 10:30 AM EST, an unprecedented collection of civil rights groups and conservative leaders is hosting a press call to release a joint letter to the Federal Communications Commission (FCC) calling for prison phone rate reform and an end to predatory phone rates.  We won’t stop until the FCC takes an honest look at the Wright Petition and until they do what they’re supposed to do – protect communities and put people over corporate profits.

Stay tuned as we keep you updated on the quest for Prison Phone Justice.

Here’s a roundup of some of the blogs and articles generated from the Prison Phone Justice campaign.

Colorlines: The Criminal Cost of Talking to a Loved One Behind Bars

Our Partners and Allies

National Organization for Women: Bring Mothers Together this Mothers Day

Kites Campaigns: Wouldn’t You Want to Call Your Mom on Mother’s Day

Susan B. Anthony Institute: Mother’s Day for Everyone

UCC Media Justice: For Some Mothers, Staying Connected is Too Expensive

Razor Wire Women: Phone Calls from Prison or Why I Hate Phone Companies

I Just Called to Say I Love You

Jason Bourne, Being “Tough on Crime”, and Prison Phone Justice

Why I Support the Prison Phone Justice Campaign