May 18, 2017 — WASHINGTON, D.C. — Dozens of civil rights and public interest organizations held a rally on the lawn of Federal Communications Commission Headquarters this morning as the FCC voted to approve a plan proposed by Chairman Ajit Pai that begins the process of repealing the commission’s 2015 Open Internet rules. Representatives from the Center for Media Justice (CMJ) and the Media Action Grassroots Network (MAG-Net) along with Free Press, Color of Change, and several other groups, stood beside “petition boxes,” symbolizing the 1 million signatures these groups gathered and that will be delivered to the FCC. 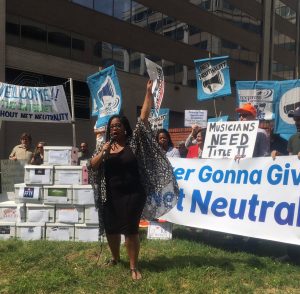 Chairman Pai’s plan calls for the FCC to eliminate all Net Neutrality rules and deregulate the commission’s legal authority over the Internet. Pai, a former Verizon executive, will attempt to replace Net Neutrality by asking Internet Service Providers to promise not to engage in practices that “hurt” consumers.

“Something I’ve learned over the past 11 years of work in black and brown, unemployed, citizen, and immigrant communities is that the right to free speech means little without the means to be heard. The internet can be that means, and in so many important moments in recent years – from Black Lives Matter to Occupy – it has been. But only if we have strong protections like Title II and Net Neutrality. We at Media Mobilizing Project, alongside hundreds of community organizations across the country in MAG-Net, are going to fight Ajit Pai, Trump, and their agenda, until we win,” said Bryan Mercer, executive director of Media Mobilizing Project, and speaker at today’s rally.

“People of color depend on the Internet to help organize a better future for our communities and we cannot let it be a place where corporations get to decide what is in our best interest. The Chairman’s plan to repeal Net Neutrality is simply about making his big telecom friends the most money, it is not about protecting the voices of Internet users,” said Chinyere Tutashinda, national organizer with the Center for Media Justice, and also a speaker at today’s event.

The FCC will be accepting public comments on this proposal through the summer. MAG-Net and CMJ allies will continue mobilizing people of color and poor people to speak out against the Chairman’s plans to repeal Net Neutrality.