Owning Our Stories: Kerner at 50

Check out the virtual town hall our friends at Color of Change and Free Press are hosting this Thursday, March 8 at 8pm to discuss the state of representation and racism in the media. Our very own CMJ Executive Director, Malkia Cyril, and MAG-Net Anchor Member, Roberta Rael, of Generation Justice will be part of the panel discussion! 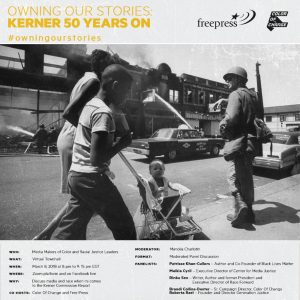 Here are the full details from Free Press:

In 1967, racial unrest and uprisings in cities across the country left more than 80 people dead and shook our nation. President Johnson created the Kerner Commission to study the root causes of the civil unrest to ensure that it would never happen again.

A year later, the Kerner Commission released its historic report, which warned that our nation was “moving toward two societies, one black and one white – separate and unequal.” The report examined issues like employment and policing. But it also included a damning critique of how media contributed to the unrest.

Now, half a century later, the problems outlined in the Kerner Report persist. There are still few journalists of color working in established news organizations. News coverage still fails to serve the information needs of our communities and perpetuates stereotypes about people of color.

And the media certainly played a role in the rise of Trump’s racist, authoritarian regime.

Join Free Press and Color Of Change for a virtual town hall as we discuss the state of our media 50 years after the release of the groundbreaking Kerner Report.

What: Virtual Town Hall Co-Hosted by Free Press and Color Of Change

RSVP: The town hall will stream on both Facebook Live and Zoom – register here for the link

The media have the power to shape worldviews, to help us make decisions and to humanize or dehumanize people. We can’t achieve racial justice if we’re unable to tell our own stories or shape our own narratives.

And 50 years out from the groundbreaking Kerner Report, not enough has changed.

Join us next Thursday to hear how we can continue to fight for fair and accurate media and join the conversation using #KernerAt50 and #OwningOurStories.