Do you remember #OscarsSoWhite? The hashtag trended last February after the Academy of Motion Picture Arts and Sciences announced that only white actors and actresses were nominated for Oscars in top categories — for the second year in a row. 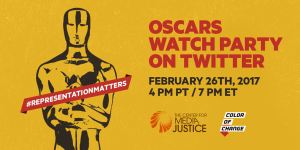 Since the controversy, the Academy has implemented new membership rules and films created and championed by artists of color have broken ground. This year, the nominees are some of the most racially diverse in recent history. Even more exciting, Ava DuVernay’s documentary, 13TH, featuring our Executive Director, Malkia Cyril, is nominated for Best Documentary!

We’ve got a long way to go until film and television accurately depict the world in which we live today. But we want to honor this moment, so we’re co-hosting a #RepresentationMatters Oscars Watch Party with Color of Change on Twitter this Sunday, Feb. 26th starting at 7pm EST. Team #MediaJustice will be providing live commentary, thoughtful analysis, historical Oscars facts, and of course, plenty of jokes.

Join the party by following the hashtag #RepresentationMatters on Twitter and RSVPing with us!

Don’t have cable TV but want to watch? Check here for livestream information.