Team Media Justice Shows Up for Net Neutrality in D.C. 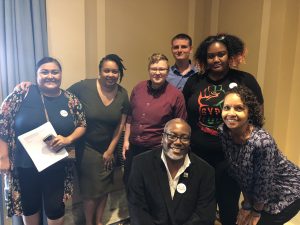 Continuing the fight for a free and open internet for people of color and poor people nationwide, community leaders from the Media Action Grassroots Network (MAG-Net) arrived on Capitol Hill yesterday to urge Congress to save net neutrality. Participation in the national “Day of Advocacy,” organized by Public Knowledge, Center for Media Justice and other allied organizations, continues our network’s legacy of advocating for an open internet to ensure that the voices of vulnerable communities can be heard loud and clear in Washington D.C.

“For us, it’s about [people of color] not being able to reach their communities,” said Erin Shields, CMJ’s National Field Organizer, when speaking in the office of U.S. Rep. Jim Cooper about the urgency of the battle for an open internet.

Below, hear what a few MAG-Net members on Capitol Hill added when asked: “Why is Net Neutrality a Racial Justice Issue?”

"[From] the #MeToo movement to #BlackLivesMatter, all of those messages…that is all given birth through net neutrality, having an open internet for everybody." – @TheBatTribble of @PhillyCAM, explains why we're in DC today for #NetNeutrality #AdvocacyDay https://t.co/dcE1AB3Tmb pic.twitter.com/LzAaS5ZSXy

"If ISPs are allowed to control what is and isn't being posted on the internet then that is going to directly impact my constituents, the majority of whom are poor folks in rural areas and people of color." – @dancinlawyer, of @Alternate_ROOTS, for #NetNeutrality #AdvocacyDay pic.twitter.com/cJZzE9KW7U

"Net neutrality is a race issue because it's about access to information and resources." – Mariah Monsanto of @BYP_100 #BYP100Durham, in DC today for #NetNeutrality #AdvocacyDay pic.twitter.com/5NPuHCypiB

See some additional photos from the day on Facebook.