Today, the Federal Communications Commission (FCC) hosted “Native Nations Day” at the FCC. The all-day event focused directly on the issues of Native Nations and communities—divided into two parts.  The first part was an open Commission Agenda Meeting during which the five FCC Commissioners met to consider and vote on proceedings relating to the provision of communications services for Native Nations and communities– including a number of issues related to the deployment of broadband, broadcast, wireline, wireless, and satellite services.

Like all open FCC meetings, this one was webcast–giving people across the country an opportunity to watch and listen as Native leaders spoke directly to the FCC.  Geoffrey Blackwell, Chief of the Office of Native Affairs and Policy welcomed the Native leaders and opened the meeting.  MAG-Net friends and allies from Native Public Media were in attendance, many Tweeting from the audience using the #FCCNative hashtag.

This was an important day for Native Nations, and other communities of color across the country. Not only has the Office of Native Affairs and Policy been leader for Native peoples’, they have also supported MAG-Net, and the communities we represent.  On two different occasions Geoff Blackwell (and his amazing staff) have hosted the Media Action Grassroots Network at the FCC.  And, earlier this summer, they worked with us to plan and host our second Townhall on the Future of the Internet in New Mexico.

As with today, this office continues to provide opportunities for our communities to ‘speak for ourselves’ providing platforms and spaces where we can speak directly with important regulatory bodies, like the FCC.  This is significant because when our communities are allowed to speak openly—we are able to share our whole-selves.  We’re able to bring our wisdom, values, world-views, and solutions to the table.  As a result, we’re able to shape policy that affects material conditions in our lives, and yet remains people-centered and community based.

This process looks and feels differently from the ‘whiteness and wonkiness’ that many of us associate with policy-making.  Most noticeable was the deep commitment to self-determination, cultural preservation and sovereignty that was named as essential to a healthy communications landscape.

Take a minute to check out some of the statements that were made this morning at the FCC and Tweeted publicly. 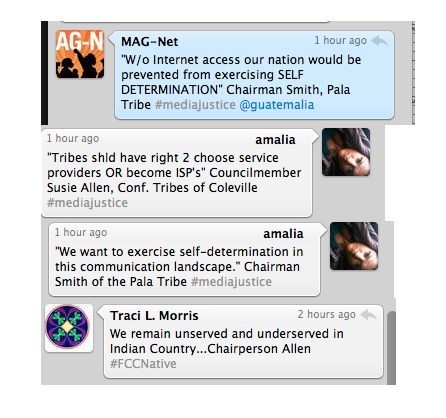 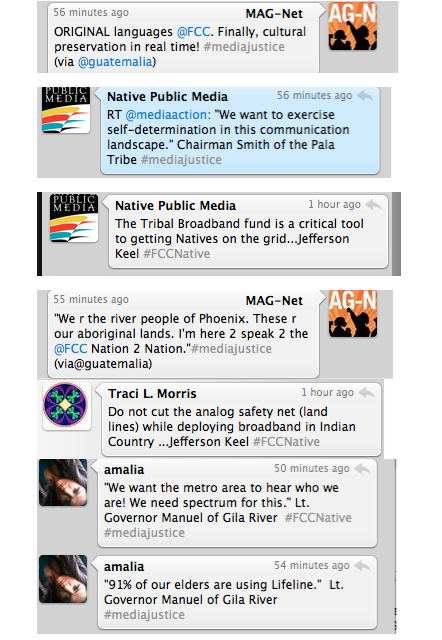