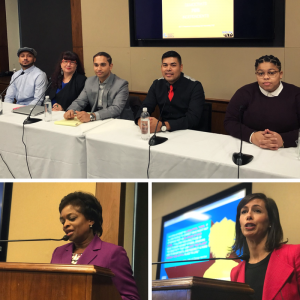 A brief panel featuring artists and advocates followed the remarks in which panelists discussed how Net Neutrality supports content creation for artists, rapid response to natural disasters, and a diversity of voices in media. They also discussed how Net Neutrality affects broadband affordability and why they oppose efforts by current FCC Chairman Ajit Pai to repeal the 2015 Open Internet Order.

The following are quotes attributable to participants of today’s congressional briefing:

“Seekers of justice use the internet today, much like the civil rights leaders of the 1960s used the telephone. As such, the threat of being blocked by gatekeepers is as real now, as it was then. This is why it is so critical for us to carry the torch for robust, open internet protections, stand up for affordable broadband services and push back against those seeking to close the door for civic and economic opportunities for all Americans.” – Democratic FCC Commissioner Mignon Clyburn

“Net neutrality is an issue of racial justice. An open Internet protects opportunities for communities of color. It lets people report on injustice and organize to confront it. We need to fight for  an open, competitive internet where people are able to express and empower themselves without relying on corporate gatekeepers.” – Representative Keith Ellison

“Our Internet economy is the envy of the world.  It was built on a foundation of openness.  Net neutrality preserves this openness–and it is time to fight to preserve it.” – Democratic FCC Commissioner Jessica Rosenworcel

“I believe what you are doing to … stand up for net neutrality and making sure we’re not pricing people out of the internet — to stand up for ultimately having internet access for all — is arguably one of the most important issues facing our nation.” – Representative Ro Khanna

The Voices Coalition, led by the Center for Media Justice and Free Press, in partnership with the National Hispanic Media Coalition, Color Of Change and 18MillionRising.org, fights for the digital rights of communities of color. Earlier this year, the Coalition urged the FCC chairman to preserve the FCC’s 2015 Open Internet Order which classified internet access providers as common carriers under Title II of the Communications Act.