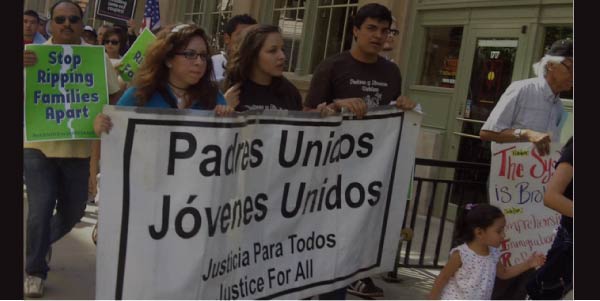 With roots in the struggle for educational justice, “Healthy Hoods” champion Padres Unidos has evolved over the past twenty years into a multi-issue organization led by people of color in the Denver, Colorado area who work for educational excellence, racial justice for youth, immigrant rights and quality healthcare for all.  Most recently, Padres Unidos published “Health Justice Report: A Community Analysis of Nutrition, Food Access and Physical Activity in Denver Public Schools”.  Read the report here.  #healthyhoods

Padres Unidos was born out of a struggle at Valverde Elementary School in Denver where parents removed a principal who refused to stop the practice of forcing Mexicano children to eat their lunches from the cafeteria floor as a form of punishment. In 1992, after a year of organizing and successfully replacing the administrative leadership at Valverde, parents determined that it was necessary to build off of their experience and work with other parents in dealing with similar issues within Denver Public Schools. Parents from all over the district were calling Valverde parents for guidance, advice and support. With no office, staff, or money, Padres Unidos was formed by parents willing to organize for educational justice, equity and excellence in Denver Public Schools.

Padres Unidos has evolved into a multi-issue organization led by people of color who work for educational excellence, racial justice for youth, immigrant rights and quality healthcare for all. Jóvenes Unidos, the youth initiative of Padres Unidos, emerged as young people became active in reforming their schools, ending the school to jail track and organizing for immigrant student rights. Both Padres and Jóvenes Unidos build power to challenge the root cause of discrimination, racism and inequity by exposing the economic, social and institutional basis for injustice as well as developing effective strategies to realize meaningful change.