Unless you’ve been hiding under a rock, you’ve probably noticed that far-right groups have strategically used the media, including social media, to spread their hate and lies. From “fake news” to racist memes, these groups have deployed their tactics to great effect. 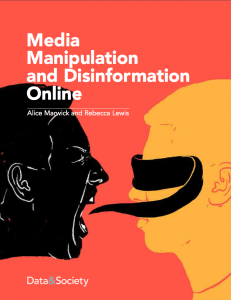 It’s critical that communities of color and organizers learn more about who is manipulating the media, how, and why, so that we can fight back.

Media Manipulation and Disinformation Online is a recent report from Data & Society which offers insight into why the media was vulnerable to manipulation from radicalized groups that emerged from a variety of internet subcultures in 2016.

Data & Society is a nonprofit research institute focused on the social and cultural issues arising from data-centric technological development.

Their report, Media Manipulation and Disinformation Online, points to a shift in democratic norms, and shares emerging opportunities for platforms and news organizations to better understand and address their role in a time of increasing public distrust.

Here are a few key takeaways from this critical report: