November 10, 2015
This article was originally posted on the Atlantic and written by Robinson Meyer. It has been reposted with their permission. 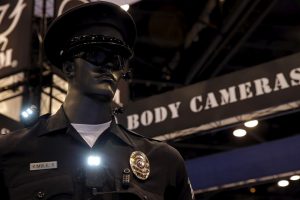 In the past year, protestors and activists have accused the U.S. police departments of systemic racism and abuse.

The nation has an app for that: Police body-worn cameras.

Since last fall, outfitting every cop on the streets with a body camera has moved from a fringe issue to de facto national policy. The federal government has provided $23 million in funding for the technology; cities have flocked to buy devices for their departments. Cameras are the country’s single most unified reply to accusations of police abuse and systemic racism.

But according to a new report from an umbrella organization of major national civil-rights groups, the city laws that govern body cameras—in other words, the very thing that will determine how body cameras work in the field—are deeply, sometimes fundamentally, inadequate. Many of the nation’s largest police departments do not address important aspects of body-camera use or have policies directly contrary to those that civil-rights organizations believe to be necessary.

The policy scorecard was developed by the Leadership Conference on Civil and Human Rights, a policy and lobbying organization for more than 200 major U.S. rights groups, and Upturn, a technology consulting firm that often advises on civil-rights issues. It examined 25 police departments across the country, including the 15 largest city forces that have deployed cameras. The report is the most comprehensive summary of municipal body-camera laws across the country to date.

“Body worn cameras are not operated by concerned citizens and are not directed at officers,” says Wade Henderson, the president and CEO of the Leadership Conference. “They are recording members of the community.”

Because they record citizens, not police, many civil-rights leaders believe that laws to govern body-camera use must be especially stringent. Body cameras could easily turn into another tool of government surveillance, they say.

Despite federal support, there are few federal laws or guidelines for the use of body cameras. Rules are set piecemeal city-by-city. There are vast differences between how even the largest departments, like New York and Chicago, handle film from body cameras.

“We’re now left with a patchwork of policies that have been developed without community input,” said Sakira Cook, a legal counsel at the Leadership Conference.

As such, a coalition of major civil-rights groups released guidelines for optimal rules in May. The report released on Monday is the first to survey how many local departments stack up.

The results are not good. No city police department was ideal. Two departments stood out in particular as having especially dreadful rules: Atlanta and Ferguson, Missouri. In every category that researchers examined, Atlanta and Ferguson either had a poor policy or failed to specify any policy at all.

City departments in Philadelphia, Detroit, San Antonio, and Albuquerque also did not fare well. All four cities have deployed body cameras but have no stated policy regarding their use.

Often the most optimal policy is only law in one or two cities. Only police departments in Parker, Colorado, and Washington, D.C., for instance, give people captured by body cameras a specific way to access that footage. (The ACLU recently hailed the small town of Parker as having one of the best body-camera laws in the country; the scorecard agreed.)

Only Baltimore prohibits the use of facial-recognition algorithms and other biometric-identifying software in conjunction with body-camera footage. Every other police department did not have a specific policy.

Almost every department examined allowed officers to watch video of an incident before filing a report. This “gives officers an undue advantage over other witnesses in a court of law,” says Harlan Yu, a technologist at Upturn.

Not every policy question was as dismal. The report found that many cities specified when officers should and should not have their cameras on while in the field. And some departments, including New York and Chicago, specifically limits the distribution of footage of more vulnerable subjects, like victims of domestic or sexual abuse.

Other civil-rights organizations have also taken a look at the consensus forming around body cameras. Last week, We the Protestors—a group of activists that emerged from organizing in Ferguson—issued their own body-cam scorecard. It also found that many cities failed its expectations. Only two departments—Chicago and Louisville—met two of its four stringent guidelines.