Malkia Cyril: Thank You, Black Internet, for Bringing #Ferguson to Me 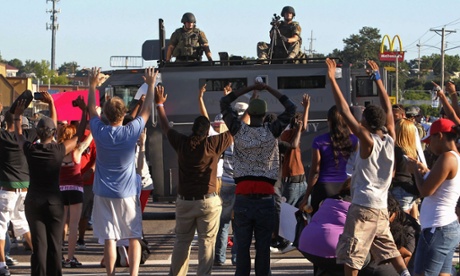 “Each new medium to arrive has had the potential to enable everyday people to push back on power, to produce and distribute authentic messages coming from our communities, undisturbed by a corporate filter. And each has repeatedly been killed. For each medium – radio, television, and print – there was the promise of people-controlled media. Yet through media consolidation and barriers-to-entry created by larger corporations to prevent new players from entering, the promise was undone.”

-James Rucker, ColorofChange.org
Excepted from Who is Killing Net Neutrality?

As hundreds of Black residents in the St. Louis suburb of Ferguson march into another day of protests against the murder of unarmed Black teenager Michael Brown; a threatened, but still open, Internet thrust the story into widespread, necessary visibility. It’s one of the reasons that keeping the Internet open is not an abstract issue for me as a Black person living in America, but a life or death one.

From digital activism that echoes local demands for police accountability, to the humbling bravery of Black bloggers that have traveled to Ferguson to speak truth to power–the open Internet is a critical battleground where Black communities can connect across geographic lines, fight media misrepresentation, and oppose the police violence we find in every city, in our own voices.

From Truth to Power: Fighting Anti-Black Brutality in a Digital Age

#Ferguson, and moments like this one that lay this nation’s greatest contradictions at our feet, is the reason a new generation of African American change-makers are demanding that the Federal Communications Commission (FCC) reclassify the Internet as a common carrier service. Too often, our lives depend on our ability to tell stories of the abuse of power, without interference from corporate gatekeepers.

As the people of Ferguson join the ranks of cities across the country raising their hands in civil disobedience against the systemic abuse of Black bodies by law enforcement agencies, FCC Chairman Tom Wheeler is considering network neutrality rules that would force Black Twitter and Black blogs to enter the conversation on police brutality through a digital “poor door”; their content tracked into a digital slow lane by expedient, piecemeal regulation that lets the largest Internet Service Providers (ISPs) discriminate through a pay-to-play scheme called paid prioritization.

I would ask you to imagine the impact of an Internet with the legal right to discriminate; if you’re Black, though, I think you already know. Black cable isn’t bringing the story of police brutality in Ferguson to your kitchen table, the Black Internet is.