Malkia Cyril, executive director and cofounder of the Center for Media Justice (CMJ), home of the Media Actions Grassroots Network, has been selected as an Honoree on TheRoot100, listed at #40. Established in 2009 shortly after the election of President Barack Obama, TheRoot100 is the online magazine’s annual list that honors Black excellence across fields and industries by celebrating top influencers driving change. The Root announced its honorees yesterday afternoon. 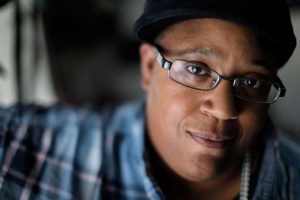 Cyril was honored for their decades of commitment to achieving media and communication rights for poor people and communities of color, for fighting against mass surveillance, state violence, and being a central force in the fight for Net Neutrality. In addition to providing key strategic leadership to CMJ, Cyril is a proud member of the Black Lives Matter Network.

“At a time when digital inequality and high tech mass surveillance pose a direct threat to the civil rights and freedom of Black people across America — I am humbled, honored, and energized to be acknowledged amongst dozens of others,” says Cyril. “I fight for Net Neutrality because Black excellence in a digital age requires an open Internet. Digital rights and access must be available to all for Black people, and all oppressed people, in order to resist rising authoritarianism and official white supremacy in the 21st century. When we fight, we win. Deep thanks to The Root for this recognition.”

TheRoot100 writes of its honorees:

“The honorees on this year’s list are a reminder to this nation that we have always been a part of everything that makes America great. That black brilliance has touched and shaped all facets of American society—in entertainment, the arts, sports, media, politics, business, and science and technology. That black activists have had to drag this country, kicking and screaming all the way, into living up to the promises of freedom and justice set forth by the country’s Founding Fathers.

And so it remains today.

These 100 honorees—culled from a list of hundreds—in all ways, big and small, are moving this country, kicking and screaming all the way, to even greater heights.”

About the Center for Media Justice

The Center for Media Justice (CMJ) is a national organizing hub that champions the media and communication rights of poor people and communities of color. CMJ is home of the Media Action Grassroots Network (MAG-Net), a national network of over 90 grassroots organizations who fight for media, economic, racial and social justice.

Forbes.com: Why The Sensitive Intersection of Race, Hate Speech And Algorithms Is Heating Up