Congratulations to Malkia Cyril, Executive Director of the Center for Media Justice!!! Yesterday she was given a Hugh M. Hefner Foundation First Amendment Award “for being the driving force in the net neutrality movement and for framing the discourse on protecting net neutrality as ‘Media Justice,’” according to the Foundation.

In an small ceremony that took place at the Playboy mansion’s infamous grotto, Cyril started off by thanking her mother, a former Black panther who passed away in 2005, and the nearly 200 organizations that make up the Media Action Grassroots Network.

“My mom taught me that knowledge is not power, contrary to many people’s opinion. What she told me is that only power is power, but knowledge is power’s prerequisite, it is power’s driver – such an open affordable and democratic Internet is a requisite driver for powerful social justice movements and democracy,” said Cyril. 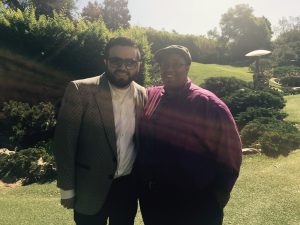 Malkia Cyril was also recently named as one of the Women who Won Net Neutrality by Slate Magazine and a 2015 Hero for Rights and Communications Surveillance by Access, an organization that defends and extends the digital rights of users at risk around the world.

The Center for Media Justice thanks the Hugh M. Hefner Foundation, and congratulates Malkia Cyril and the other winners for their awards.