Making “Illa-Noise” in Chicago Against NATO and the Afghanistan War

“I am a daughter of an [Afghan] refugee, and my taxpayer dollars are being used to kill my family.  The media is playing this [Afghanistan war] as a “good war” and that it is helping to liberate Afghan women. Bombing Afghanistan into oblivion is not going to help these women.  NATO occupation out of Afghanistan!”

On Sunday, May 20th, veterans of the Iraq, Afghanistan and the “Global War on Terror”, led by the Iraq Veterans Against the War, returned their war medals to NATO’s generals, denouncing and calling an end to these senseless wars.

This past weekend, President Barack Obama hosted the North Atlantic Treaty Organization (NATO) Summit in his hometown of Chicago. It’s the largest meeting in its 63-year history. The Chicago Police Department and Homeland Security declared Chicago, a “National Security Event”, and deployed thousands of federal, state and city law enforcement authorities to clamp down on a peaceful and non-violent display of protest and free speech.  But long before NATO set its eyes on Chicago, the city has had a reputation as a “police state” with a history of encouraging violence against people of color and activists. 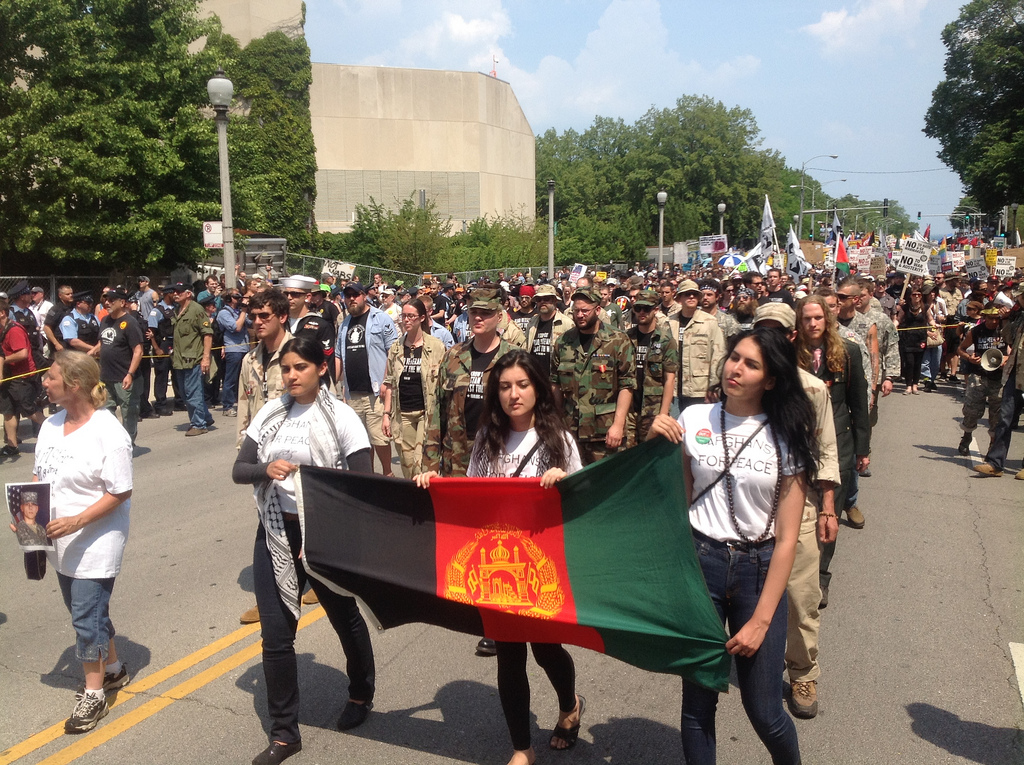 NATO’s theme this year was the 12-year war against Afghanistan, repeatedly called by the Bush (and now Obama) administration “Operation Enduring Freedom”.  This weekend, as war generals and government officials met to discuss this continuation of war, the number of soldiers killed in the Iraq and Afghanistan wars climbed to 6428.  According to a recent United Nations report, 2011 was the deadliest on record for civilians in the Afghan war, with 3,021 killed.

A few days before the NATO Summit, the American Civil Liberties Union was able to negotiate 10 minutes in the official General Assembly schedule to present alternative anti-war views to NATO.  I had the pleasure of editing a short 4-minute video, with guidance from IVAW and it that showed on two large 50-foot jumbotron screens during the two-day meeting. Creating videos like this in collaboration with movement-building groups like IVAW and screening in front of  NATO officials, is also the embodiment of media justice.

I felt honored to have had the opportunity to make a small contribution to this important work.  As one veteran put it:

“The enemies are not 7,000 miles away from home [in Afghanistan] they are sitting in board rooms, they are CEOs, they are bankers….and we’ve had enough of it…”

On Sunday I, like many other activists and organizers who weren’t on the ground in Chicago, scrambled between #NONATO #NATO twitter feeds, Facebook status updates, choppy live webstream feeds, Occupy Chicago, and other alternative websites, to piece together what was is happening with the protests. The mainstream media, of course did its job of blacking out the large protests from the American people’s consciousness. Instead, the corporate media justified the high level of anti-terrorist security, depicted the protests as “violent clashes” and downplayed the numbers, saying there were only 2000 people marching- despite countless eyewitnesses who reported tens of thousands marching in the streets.  If it wasn’t for network neutrality and Internet Freedom, my ability to access all these sites to construct what was happening would be virtually impossible.

On the ground level, activists took it upon themselves to broadcast what was really happening through live webstreams, filming these actions with their mobile phones.  On the #NONATO and #NATO twitter feeds, messages flooded in reporting on blocked off streets and stories of helping fellow protestors navigate to the march. When asked what the reactions were like from the police to all these cameras in their faces, one livestreamer commented, “they don’t know what to do or how to react. It’s still new to them”.  In the past, authorities could implement their own violent brand of “crowd control” largely unchecked.  Suddenly, the protestors have turned the tables on the police and are broadcasting live the brute force authorities have used against protestors.

In the last few days, dozens of videos shot largely by mobile phones captured the heavy police crackdown on protestors, one even showed someone getting run over by a police van.  Tim Pool, operator of Timcast UStream, a popular livestream, along with two other protest livestreamers were stopped at gunpoint by the Chicago police department in the middle of the night on Saturday and interrogated.  Their car was stopped which held a car full of livestreaming equipment and in real time documented and broadcast being stopped to the rest of the world via the Internet.

Media Action Grassroots Network (MAG-Net) Chicago Chapter Anchor, Community Media Workshop (CMW) has been planning around the NATO Summit for many months.  They conducted a “know your legal rights” workshop with journalists who were coming into town from all around the world cover the protest.  CMW staffers educated journalists and activists on their legal rights if they were to be stopped and harassed by the Chicago or Homeland authorities as they were covering the protests with their cameras, notepads or mobile phones.  They also started and managed Chicago Stories, a website created for journalists, connecting them with local stories and protests.  Their mission was also to inform the out-of-town journalists what social justice issues Chicagoans face daily. Another regional MAG-Net member, Vocalo.org worked tirelessly to report on the protests and actions, organizing special programs and providing an important alternative platform for organizers and activists to talk about why they were protesting NATO.

All last week, protestors flooded the streets, calling for an end to the U.S. government funding of these current wars, and redirecting money and focus on domestic issues around immigration, housing, education, the environment, labor, the economy. Local social justice groups led many of the protests and seized the opportunity to highlight on a national level the organizing efforts to eliminate poverty and racism in Chicago, Illinois.  Groups also held an alternative to the NATO Summit,  called the “People’s Summit” co-organized by groups like Center for Community, Democracy, and Ecology, CODEPINK, Afghans for Peace and MAG-Net member, Arab American Action Network. Saturday’s protests ended up with a march to the home of Mayor Chicago’s Rahm Emanuel house, former White House Chief of Staff in President Obama’s administration. 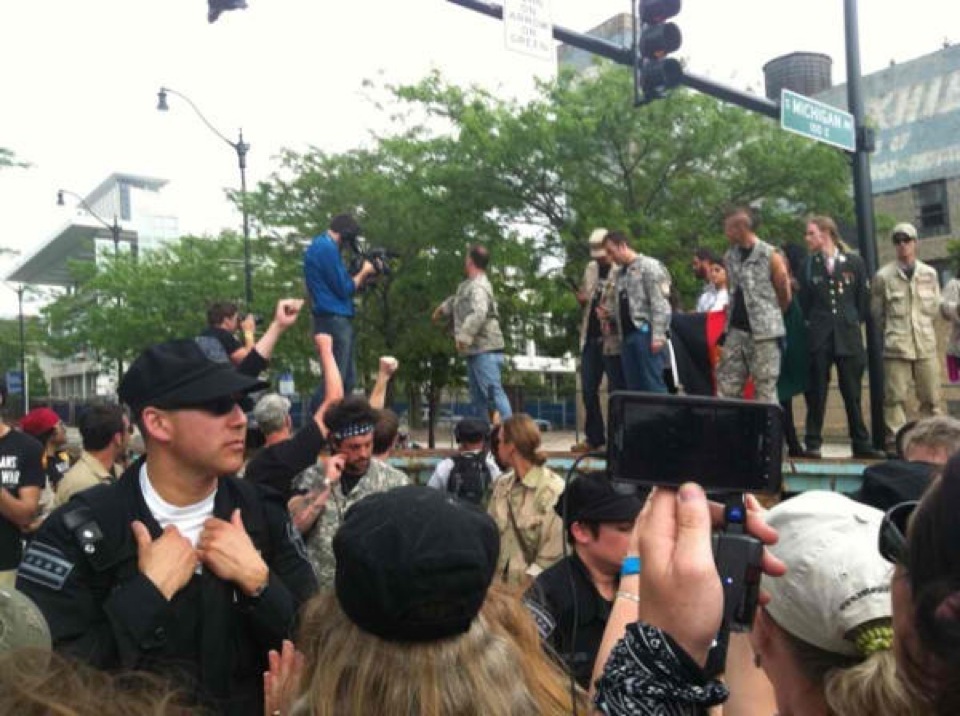 On Sunday, I watched the Chicago Indymedia’s choppy livestream of the weekend’s largest march.  I couldn’t help but get choked up when I saw members of Afghans for Peace, an international organization of Afghans calling for an end to occupation in Afghanistan and right for Afghan people to self determination march with veterans of the Afghanistan, Iraq and Global Wars on Terror. Members of Iraq Veterans Against the War, a national veterans group giving voice to the large number of active duty service people and veterans who are against this war, but are often forced to remain silent, tossed their war medals back at the NATO generals.  The medals symbolically represented a rejection of ongoing wars, the continued suffering of the Iraq and Afghan people and shedding light on the deep mental and physical traumas faced by the “working class soldiers fighting the ruling class’s war” as one veteran put it.

Over forty veterans stood on stage, in front the thousands (and the world via livestreams) each having a chance to express their views before they threw their medals over the fence in the direction of the NATO Summit.  Veterans who hurled their medals back to NATO included Scott Olsen, a former marine who survived two Iraq tours but was nearly killed when he was struck by a projectile thrown by the Oakland Police Department during a march at Occupy Oakland back in November. One veteran eloquently said before tossing his medal, “I am returning this global war on terror medal, I’m deeply sorry for the destruction that we have caused around the world.  I’m proud to stand here with my fellow veterans and Afghan sisters.  These were lies.  I’m giving these back.”  Another veteran dedicated his returning of his war medal to his fellow soldiers, “This is for all my brothers and sisters affected with Traumatic Brain Injury, Military Sexual Trauma, Post-Traumatic Stress Disorder” shedding light on their Operation Recovery and Right to Heal Campaign.

Members of Afghans for Peace stood along side on stage holding an Afghanistan flag, as each veteran threw their “Global War on Terror” medals back to NATO. IVAW is demanding that NATO immediately end the occupation of Afghanistan and relating economic and social injustices, bring U.S. war dollars home to fund our communities and acknowledge the rights and humanity of all who are affected by these wars.