“Macklemore is the white people’s Obama.”

I didn’t say it. My main man, Albuquerque-born MTV Voices StreetCaster and comedian extraordinaire Anthony Almanzar said it. He said:

And I said this: 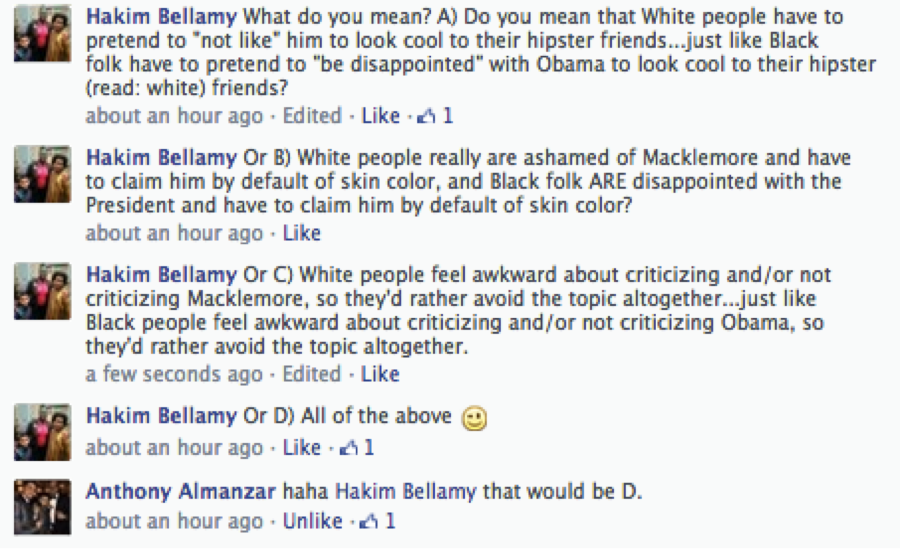 Almanzar, made a provocative statement that’s got a whole lot of merit when you think about it. As is true with all good comedy. So I gave it an ETERNITY of time on the Social-Media-Attention-Span-o-meter, with four posts worth of response. Much like many of you, I thought we were done with Macklemore and moving on to more pressing issues like the deportation of Justin Bieber. BUT HERE HE GO winning the Grammys, and beating out Kendrick Lamar in three different rap categories.

So he’s back. And here we are again criticizing him, for better and for “hearse” (read: to death). So I’ll take this opportunity to resurrect a blog I wrote about Mr. Haggerty back in November, when I thought “Thrift Shop” and “Same Love” were on their pop radio wane (I have a 6 year-old so I am all pop radio’d up on the drives back and forth to school!). Back when “White Walls” was a figment of a Clear Channel playlist’s imagination. Written for and by people like me, a media critic/music columnist who didn’t even watch the Grammy’s (because I don’t have cable), but quickly found a couch and a big screen to watch the State of the Union Address like it was “The Big Game.” I should be ashamed of myself. – hb

White Privilege is a broken record. – by hakim bellamy

Regardless of what you think about Macklemore and his music, he seems to be living a very public lesson about white privilege. The lesson is that there are two things you must know when using white privilege for “good.” 1. The powers that perpetuate and can ultimately upend white supremacy look like you; and as such, will hear things said from your place of privilege in a way they otherwise would not. From that “insider” position you can affect change, and that’s a blessing (Dr. King famously and frequently noted that call of duty). 2. You will endure righteous criticism and skepticism of motive, for saying and getting credit for what we (marginalized, underrepresented, oppressed people) have been saying for YEARS and gone unheard. From that “outsider” position you are affecting change, and that’s your burden.

If that is the only trade-off you have to sign up for, in exchange for a lifetime of unearned AND un-asked-for privilege, I’d say it’s still a pretty sweet deal. If you believe what you believe, you are not saying what you are saying in the interest of making “friends” with the your white/straight/male peers that don’t wanna hear it nor in the interest of making “friends” with the people of color/queer/non-male peers that already know it. You are doing it because you live with yourself, and you want to grow up to respect and like yourself…and the world around you. So persist, not just on MTV Video Music Award (VMA) bully pulpits but by investing your actions, your money and your fame in the very communities you have the privilege of speaking for. Make sure that they are benefiting from your words and much as your image is. You could have talked about bullshit, which is the norm. But you didn’t, duly noted. That never makes you the most popular guy at the party when all everyone else wants to talk about is getting high and getting laid.

Do you deserve all the praise you are getting for being a “good dude?” Probably not, you should be the norm, but we live in a society that praises fathers for simply remembering their children’s names because we’ve set the bar so low for ourselves. Do you deserve all the criticism you are getting for being bleeding heart white guy? Probably not, but I hope you are learning something from the experience. And I hope it doesn’t make you go “f%&k it” and retreat to the great American tent of white anonymity. Because that “safe space” is only safe for people that look like you.

As the inaugural Poet Laureate of Albuquerque, NM (2012-2014), guest blogger Hakim Bellamy is a national and regional Poetry Slam Champion, and holds three consecutive collegiate poetry slam titles at the University of New Mexico. His poetry has been published in Albuquerque inner-city buses and numerous anthologies. Bellamy was recognized as an honorable mention for the University of New Mexico Paul Bartlett Ré Peace Prize for his work as a community organizer and journalist in 2007, and was awarded the Emerging Creative Bravos Award by Creative Albuquerque this year. He is the co-creator of the multimedia Hip Hop theater production Urban Verbs: Hip-Hop Conservatory & Theater that has been staged throughout the country. He facilitates youth writing workshops for schools and community organizations in New Mexico and beyond. Having recently released his first book, Swear, Hakim successfully defended his MA Thesis in Communications and Journalism Department at the University of New Mexico in May. He is the proud father of a 5 year-old miracle and is the founding president of Beyond Poetry LLC.  Learn more about Hakim and his work here.