LGBT Youth Promote Justice By Creating Their Own Media

We face grave dangers to social gains that have been hard won by social movements: the possibility of a so-called “religious freedom” executive order (not yet passed at presstime) that would amount to a green 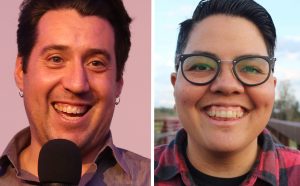 light for anti-LGBT discrimination; the appointment of a secretary of education whose only track record on public education has been a series of campaigns to destroy it; an executive order to ban immigrants from seven countries that, if implemented, will lead to a humanitarian crisis, impacting countless numbers of LGBT immigrants and immigrant youth. And we are living in a time where any disagreement with these policies within the media is attacked by the our president’s administration.

Right now, we are at a crisis point, and we, as youth development practitioners, are uniquely positioned to support the leadership of transgender youth, low-income LGBT youth, immigrant LGBT youth and LGBT youth of color (youth who will be directly harmed by these policies) to build momentum for change and shift culture, power and policies, toward a just, equitable and truly democratic society. At Global Action Project (GAP), a 25-year-old social justice youth media organization, we strongly believe that those most affected by injustice need to play a leading role in challenging and reshaping the narratives around the key issues of our times.

For this reason, we urge and invite youth-serving organizations nationwide to join us in our efforts to lift up the voices of young people from low-income, new immigrant and LGBT communities. Through SupaFriends, GAP’s media arts program, LGBT youth produce media that helps effect liberation for themselves and their communities.

It’s designed to be a safe space in which young people build leadership, heal, explore identity, foster community, and express their unique stories through the production of thought-provoking media — and use that media to engage their communities. This civic engagement comes through workshops and screenings at their schools, neighborhoods, youth service centers and conferences.

The production and distribution of their media supports advocacy for just policies and a cultural discourse that affords marginalized communities equitable dignity and power. This media, and the curriculum we use in tandem, is a powerful communication tool because it opens up possibilities for communities to imagine and aspire to a different world.

Trans and gender-nonconforming youth have always been at the center of SupaFriends’ work.  Recently, we made even more explicit the program’s focus on making media that can play a strategic role in advancing justice for transgender communities. We did this because of the urgency we feel to support trans youth, who face daily barriers, violence and threats of violence, to lead movements that fight for gender freedom.

Trans communities have been under under severe attack at local and state levels, and now at the federal level as well. For example, 12 states have pending laws regulating transgender people’s use of public restrooms. And while there has been some headway in term of positive trans visibility in the mainstream media, it is still rare to see media created by and for trans youth of color, trans immigrant youth and low-income trans youth.

We know that continuing this work in the current political climate will be especially challenging, and we cannot do it alone. We are eager to partner with groups across the country to support the new generation of LGBT youth media activists who make media to shape and reframe public debate around the issues that matter not only to LGBT youth, but to all of us that want to live in a safe and just society. Together, we can increase our impact by strategically developing and amplifying new narratives to raise awareness, collectively envision community-based solutions, and create solidarity across and within communities in efforts to change policies and effect social change.