Reposted with permission from Equal Future

Since we released our Body Worn Camera Policy Scorecard together with the Leadership Conference last November, body cameras have gained even more attention and traction nationwide. Many more departments are adopting the new technology in hopes of increasing transparency, but many incidents have already occurred where an officer failed to record a critical event, or a department held back footage in a high-profile incident. Nevertheless, departments across the country are barreling forward in procuring and rolling out BWC programs, often without ensuring proper safeguards for civil rights.

Accountability is not a given with body cameras — the policies governing the use of these cameras determine if officers are allowed to turn off cameras at will, if victims of violent crimes have the right to request that an officer stop recording for privacy reasons, and if powerful new technologies like facial recognition can be integrated into the cameras.

We’re excited that some departments have improved since last fall: initially, only Baltimore limited the use of facial recognition together with cameras but since then, Boston, Cincinnati, Montgomery County (MD), Baltimore County, and Parker (CO) have all followed suit. San Francisco improved its policy, by limiting the situations in which officers are allowed to review footage while preparing incident reports, which ensures that officers can’t whitewash their reports to obscure events that happened outside of the camera’s view, and the department now has a clear process for individuals to request access to footage in which they are subjects. Several departments have also improved their policies’ protections against employees tampering with or deleting footage, another vital protection to promote transparency and accountability for officer conduct. 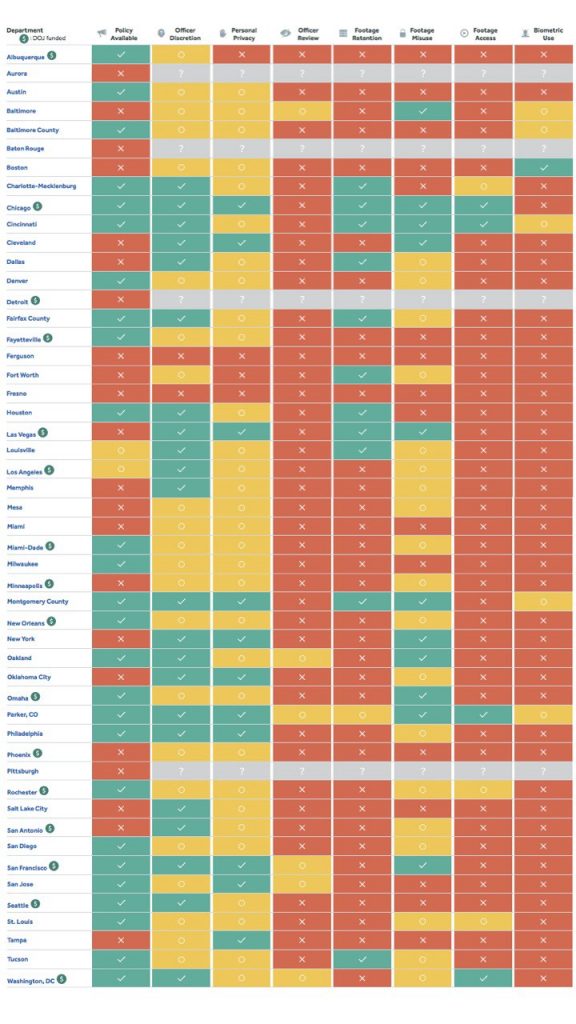 But the policy landscape is shifting rapidly. Since our initial release, many departments have already updated their policies based on their early experiences on the ground or community feedback, and still more have launched new body camera programs and policies to great fanfare. But plenty of departments have a long way to go before they provide the necessary protections for civil rights that we laid out — together with a broad coalition of civil rights, privacy, and media rights group — in our shared Civil Rights Principles on Body Worn Cameras.

Our methodology for evaluating policies is still the same — the scorecard measures, on a three level scale, whether each department:

We’ve also gathered some of the strongest policy language across each dimension to create a collection of “notable policies,” or sections of policies that represent particularly strong protections for civil rights. 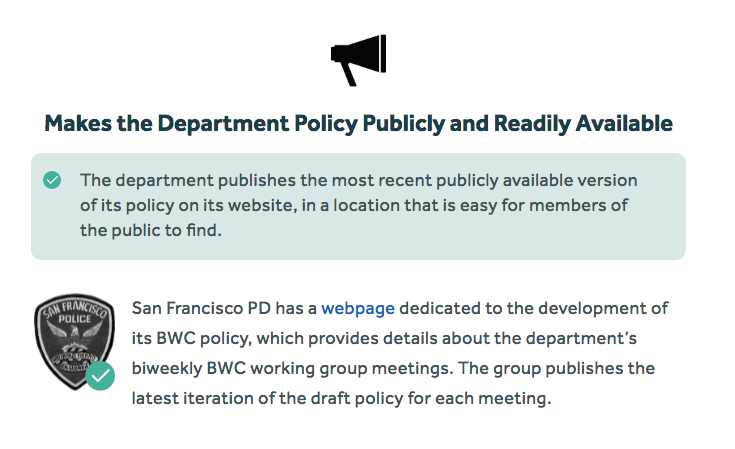 Even departments that did well in some categories have room to improve in others, so we hope advocates can use these examples to press departments to make meaningful changes. Or even better, we hope departments will be proactive in improving their own policies. Most of all, we hope the scorecard sparks conversation and engagement in communities across the country, like what is happening now in Pittsburgh, about whether and how body cameras should be used in our communities, so that their promise of transparency and accountability can actually be realized.