Keep Pushing – The Mother’s Day Action Goes Through this Monday 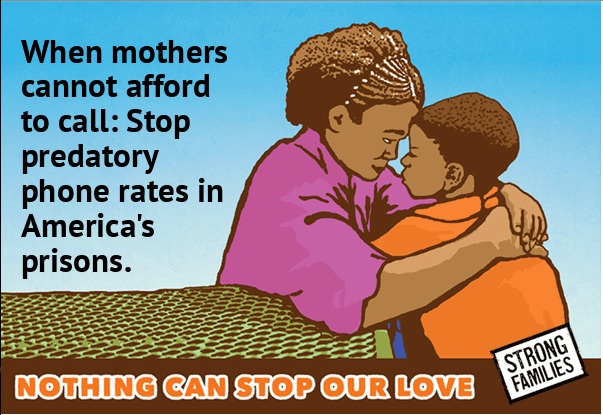 Today the Center for Media Justice and our partners in the Prison Phone Justice Campaign, launched a Mother’s Day of Action.  The Action calls for families to send electronic postcards to the Federal Communications Commission (FCC) urging them to take action of the “Wright Petition”.

Our Mother’s Day Action will be continuing through Monday.  Thanks to all of you we’ve collected over 500 stories for the FCC, over a 100 people have downloaded our Toolkit and several blogs and actions went out over the Internet.  But we can go further – this Sunday thousands of mothers will be disconnected from their families because of egregiously high prison phone rates.  Please keep pushing – the FCC needs to hear your voice.

To fill out a postcard go here.

And check back here early next week for a complete wrap-up and round-up of all the blogs, actions, and news on the Prison Phone Justice campaign from around the Internet.

Background on the Wright Petition and the Prison Phone Justice campaign

The Wright Petition, which has been in front of the Commissioners since 2004, requests the agency to examine the public harm caused by high phone rates charged to people in prison.  Originally filed by Martha Wright, the grandmother of a former prisoner, it highlights the relationship between prison administrators and commercial phone companies that has allowed for such extraordinarily high rates. A typical 15-minute call costs between $10-15 in most prisons.    The petition also points to the numerous studies that demonstrate the substantive value of keeping people incarcerated connected to their loved ones, namely decreased recidivism and increased chances for success post-release.

“The Wright Petition was filed in an attempt to rectify a great injustice – namely, the charging of exorbitant interstate phone rates for families to remain in contact with those that are incarcerated,” says Attorney Lee G. Petro, who represents Mrs. Wright in her claim. “In light of technological developments that have increased the service providers’ economies of scale and decreased their costs of service, there is simply no valid justification for the rates being charged family members, most of whom are already struggling financially.”

As part of the Mother’s Day Action, the organization Thousand Kites produced a half-hour radio program featuring the stories of families struggling to stay connected with loved ones in prison.

“My husband is in prison, and in order to communicate with him, I have to pay extremely high prices,” says Charlotte, whose story is part of the radio program.  “I sometimes can’t afford to pay my bills because I want the simple joy of hearing the sound of my husband’s voice. Something has to change.”

“For 2.7 million children with a parent behind bars, delivering a ‘Happy Mother’s Day’ message is only possible through an expensive phone call,” says Steven Renderos, National Organizer at the Center for Media Justice. “The FCC can address this problem by passing the Wright Petition.”