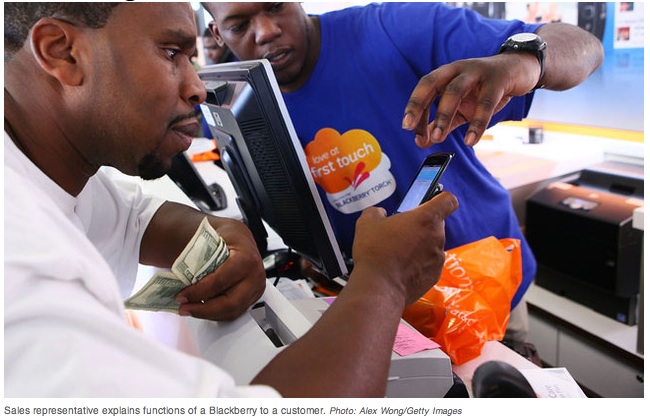 As the 2011 holiday shopping season geared up, the country’s leading mobile wireless carrier, Verizon, announced a special deal. For a limited time only, customers could get the popular HTC Droid Incredible 2 smartphone for free, if they signed up for a two-year data plan. Since the phone’s full retail price is usually more than $430, the deal meant a savings of more than $200 with a new contract. It features a four-inch touchscreen and eight mega-pixel rear camera, along with top-of-the-line video and one of the industry’s fastest processors. It’s everything you need to feel like you’ve got the Internet in your pocket, and for a fraction of the price of a computer. That’s a compelling selling point for many buyers, but particularly so among the black and Latino consumers who are so key to the now-massive smartphone market.

A remarkable share of that revenue is coming from people of color, who are adopting smartphones at faster rates than white consumers and are doing far more with them. Research shows people of color are more likely to surf the Internet, send and receive messages, engage social media and produce or publish media on their phones. The reason for that, many say, is simple: It’s the most affordable way to get onto the information superhighway. A couple hundred dollars for an Android and a data plan is much less than $1,000 for a laptop computer and broadband connection. Read the full article here.

THURSDAY: Rep. Tlaib Joins Activists of Color to Urge Action to Root out White Supremacy and End Criminalization of Black and Brown Dissent