It’s official. We took over the Internet!

We’re amazed at the incredible actions taken across the country on the Net Neutrality Day of Action, this past Wednesday, July 12!

CMJ, MAG-Net, and our partners pushed record-breaking numbers of people to submit comments to the FCC and Congress in defense of Title II Net Neutrality protections. 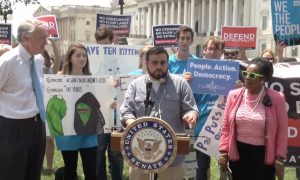 Here’s a rundown of the stats: Our friends at Fight for the Future report that over 2 million comments were sent to the FCC! This number is almost triple that of a similar action for Net Neutrality in September 2014. In addition, we helped send over 5 million emails to members of Congress and made nearly 125,000 phone calls to their offices. (1) Some estimates even report that social media posts about the Day of Action reached a potential 2.44 billion people! (2)

CMJ Organizing Director, Steven Renderos, was on the ground in Washington, D.C. – check him out in the picture, speaking at U.S. Senator Ed Markey’s press conference on Net Neutrality!

Here’s what our executive director, Malkia Cyril, had to say about the action: “Today, thousands of people of color and civil rights leaders raised our voices to say loud and clear: we won’t let our internet become like cable TV, a white, middle class, and male bastion where we are shouted down daily. We’ll keep joining with allies of all kinds across the lines of difference to fight for our digital voice, and ensure that an open Internet protected by Title II net neutrality delivers political power and economic opportunity for those long excluded from both. The stakes are too high to do anything less.”

We’ll continue to defend the Open Internet, where communities of color and organizers can speak out for justice, access economic opportunities, and more. Support the fight with a $10 donation today.