FCC, Deliver The Internet We Deserve

On November 20, members of the Media Action Grassroots Network and our allies at Color of Change, Presente.org and Free Press met with FCC Commissioner Mignon Clyburn to deliver a letter signed by more than 90 racial justice and civil rights organizations. 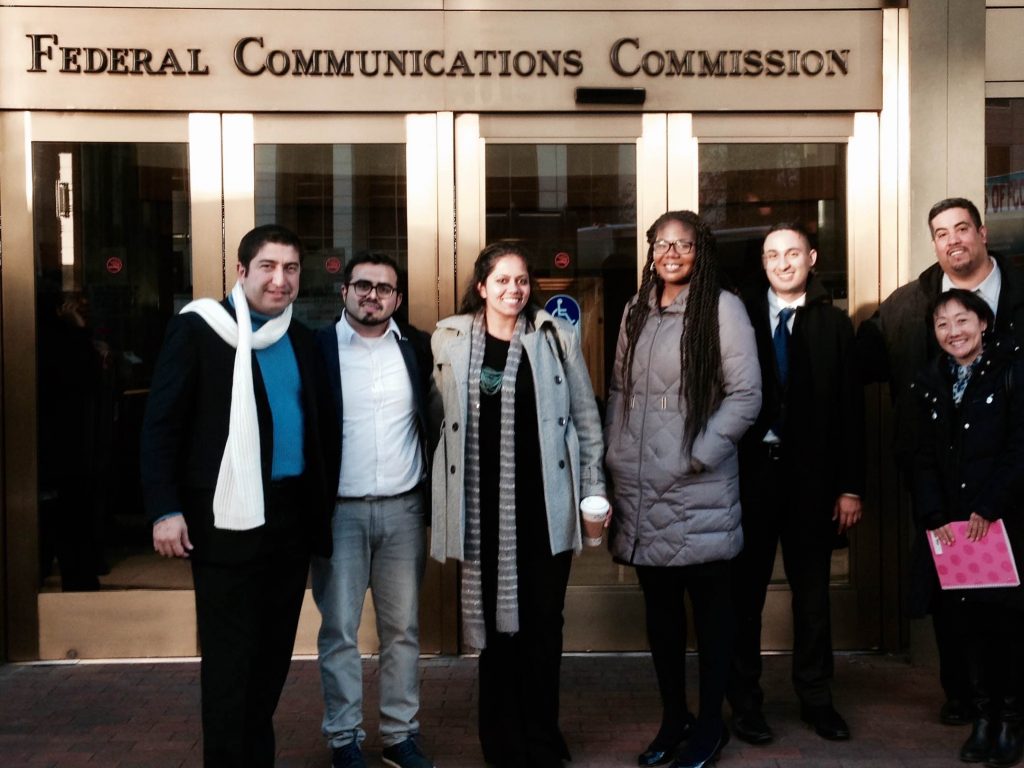 On November 20, members of the Media Action Grassroots Network and our allies at Color of Change, Presente.org and Free Press met with FCC Commissioner Mignon Clyburn to deliver a letter signed by more than 90 racial justice and civil rights organizations. Endorsers of the letter called on the Federal Communications Commission to implement real Net Neutrality rules by reclassifying broadband as a Title II common carrier service. Our meeting with Commissioner Clyburn came shortly after President Barack Obama’s bold statement on net neutrality. Our letter and President Obama’s statement join a chorus of more than 4 million people that have submitted comments on this issue at the FCC, with the vast majority favoring net neutrality and reclassification.

We brought this delegation of civil rights leaders to Washington D.C. to remind Commissioner Mignon Clyburn that the communities that will be most adversely affected by weak net neutrality rules are communities of color. Presente shared how vital an Open Internet has been in pushing the immigration debate to the doorsteps of an Executive Order by President Obama. For Color of Change, an organization that grew from one e-mail in the aftermath of Hurricane Katrina to the largest online community of African Americans, the Internet has allowed them to stake out a powerful political voice. The evidence of this power is unfolding in Ferguson as we speak.

The delegation also included Free Press and members of the Media Action Grassroots Network, Center for Social Inclusion and the National Hispanic Media Coalition. We delivered the message that strong net neutrality 1) ensures companies are not allowed to discriminate against voices online, 2) bans fast lanes and slow lanes and 3) provides equal protections for the 60% of Latinos and 43% of African Americans who access the Internet primarily through their cell phones. We highlighted that a D.C. circuit court made clear– that in order for the FCC to ban discrimination online, they must reclassify broadband as a Title II telecommunications service. Simply put, the FCC must regulate the Internet like a utility, and not like an entertainment platform.

For poor and working class communities, and people of color, the fight for digital rights is one of the most significant civil rights struggle of the 21st century. Many have likened its importance to that of the Voting Rights Act of 1960s. Prior to 1965, African Americans had the right to vote, but voting rights rules were weak and fraught with discriminatory practices (literacy tests, poll taxes), making it virtually impossible for African Americans to register to vote. As a consequence, the agency and ability of Black communities to shape the outcomes of their lives remained limited. White politicians they never voted for created the laws, while all white juries decided their fate in court. The Voting Rights Act was a major milestone in the struggle for civil rights, and set the stage for the growth of political power within communities of color.

Please join us in preserving our right to a voice and lets continue to pressure the FCC to deliver the Internet we deserve.