F.C.C. Proposes Phone Rate Relief for Families of the Incarcerated 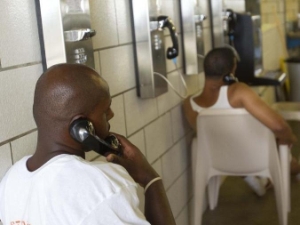 Today the Federal Communications Commission announced its proposed rules to make phone calls from correctional and detention facilities more affordable by capping rates and eliminating expensive fees. Members of the Media Action Grassroots Network, made up of nearly 200 organizations across the country, applaud the move as a huge step to address exorbitant call costs paid for by the families of those incarcerated. The proposed caps will affect all calls from prisons, jails and detention centers across the country and are capped at 11 cents a minute for state and federal facilities and 14 to 22 cents a minute for jails. This move builds on the FCC’s 2013 reforms which lowered rates for out-of-state phone calls, which accounted for only 15% of total calls.

“After 12 years of incarceration with hardly any communication with my father, it would be the greatest feeling to talk to him more often and longer at an affordable rate,” said Jazlin Mendoza, a New Mexico youth leader with Generation Justice. “My father and I only get to talk briefly because the rest of my family also want to talk to him, so all I have time to say is ‘Daddy I love you and miss you. ‘ Affordable phone rates would make a great impact not just for me but for others who experience the same thing.”

Studies have shown that communication between families and their incarcerated loved ones is tied to reducing recidivism. According to the “Who Pay’s? The True cost of Incarceration Families” a report released last week by Ella Baker Center, 1 in 3 families go into debt because of the high cost of maintaining contact with incarcerated family members.

“So many of our loved ones are unable to visit us to the extent they would like because of restrictions, cost and distance, which is why we rely on the telephone,” said Kevin Reese who is currently incarcerated at the Lino Lakes Correctional Facility in Minnesota and is an advocate for prison reform with Voices for Racial Justice. “The high cost of phone calls leave some men with decisions of buying things like toothpaste or soap over calling their children.”

Corporations have come under fire for the escalating profits they are making off this captive audience. Securus, which provides phone services to 2,600 prisons and jails in 47 states, made $114.6 million in profit in 2014, representing a 51% gross profit margin and one of the biggest jumps in years.

“This proposal sends a clear signal to prison profiteers who operate the telephone system that the era of big profits off of low-income families is coming to an end,” said Brian Dolinar from Illinois Campaign for Prison Phone Justice.

Also under scrutiny are the sheriffs and corrections facilities who received over $460 million in commission payments – or “kickbacks” – from prison telephone companies in 2014. In those states where commissions have been eliminated or reduced, the rate of a phone calls is closer to 5 cents a minute and 11 states now have rates below 10 cents a minute.

“We would not be on the verge of ending predatory prison phone rates were it not for the tireless leadership of FCC Commissioner Mignon Clyburn,” said Steven Renderos Senior Campaign Manager with the Media Action Grassroots Network, which includes Ella Baker Center, Voices for Racial Justice, Generation Justice, and the Illinois Campaign for Prison Phone Justice. “Commissioner Clyburn is demonstrating to the children of the incarcerated that they have a right to be connected to mom and dad. We look forward to continuing to work with her to ensure that all forms of communication in and out of prisons remain affordable.”

The FCC expects to rule on this proposal at its October 22st meeting.