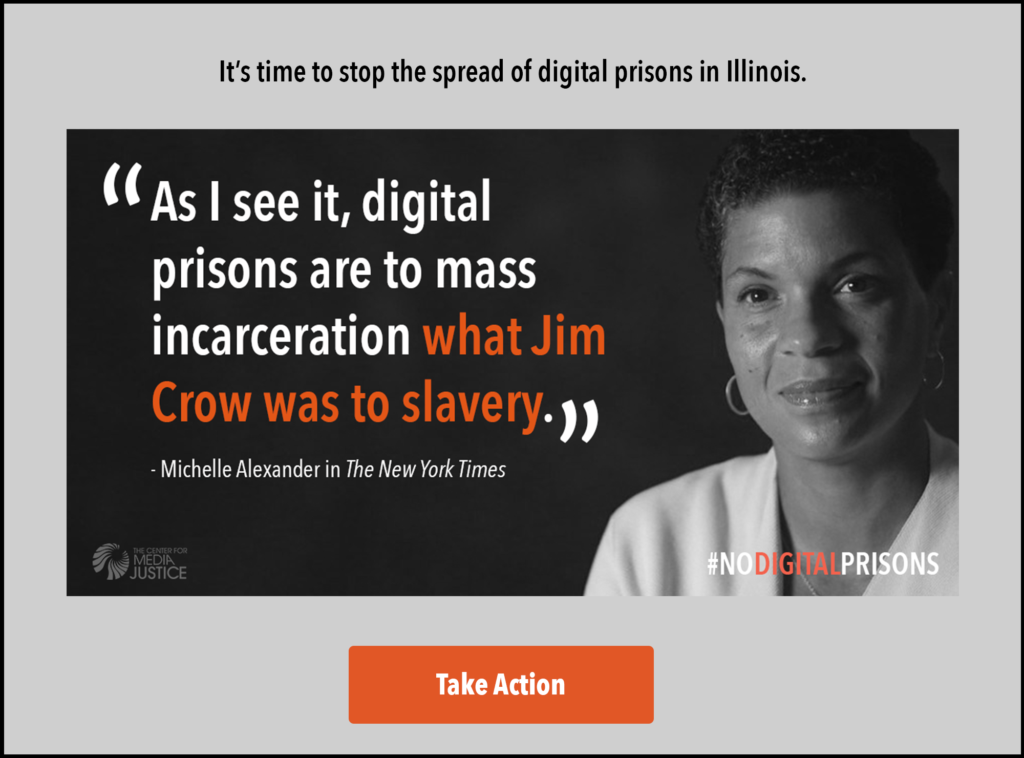 For most people released from prison in Illinois, incarceration doesn’t end when they exit the gates. There are currently nearly 3000 people on “mandatory supervised release” in the state shackled to an electronic monitor.*

These devices subject people to house arrest, creating enormous obstacles to finding a job, seeking medical care, responding to emergencies and integrating into their communities. Augie Torres, who spent nearly 20 years in Illinois prisons, gave up looking for work while on a monitor because the restrictions were so severe. Monitors are another form of incarceration. But if you’ve served your time, your imprisonment shouldn’t be extended by electronic surveillance.

Michelle Alexander, author of The New Jim Crow, recently published an op-ed in The New York Times citing our work and warning about a growing wave of digital prisons in this country. She writes, “Many of the current reform efforts contain the seeds of the next generation of racial and social control, a system of ‘e-carceration’ that may prove more dangerous and more difficult to challenge than the one we hope to leave behind.”

Nationwide, the market is growing for privatizing all forms of state supervision: probation, parole, pretrial release, and drug testing. And electronic monitors lie at the forefront.

As noted in our “No More Shackles” report, the population of individuals on parole grew from 220,000 to 826,100 between 1980 and 2015. At the same time, the use of electronic monitors has grown by 150%. Rather than investing in resources that support individuals who are returning home after their incarceration, prison profiteers like the GEO Group and Securus are growing their electronic monitoring business and expanding the surveillance state. They only have one motive: making a profit off the most vulnerable, especially Black and brown people living in poverty.

That’s why our Challenging E-Carceration project seeks to stop the expansion of digital prisons through electronic monitoring. When people walk out of prison in Illinois they should be set free, not further shackled and surveilled.

Join the fight and sign our petition demanding #NoDigitalPrisons in Illinois.

*Commonly and incorrectly referred to as “parole” by many in Illinois. For more information about mandatory supervised release and parole in Illinois, click here.