Debating the debates: Why they mean more than ever

The last presidential debate between President Obama and Mitt Romney was watched by nearly 70M people.

Yet the prevailing common sense of the beltway pundit class has been that debates don’t really change the outcomes of elections.

Ezra Klein summed it up on WaPo’s WonkBlog as such:

Wonkbook’s number of the day: 0. That’s the number of recent elections that we can confidently say were decided by debates.

Gallup, for instance, reviewed their polls going back to 1960 and concluded they “reveal few instances in which the debates may have had a substantive impact on election outcomes.” Robert Erikson and Christopher Wlezien, in “The Timeline of Presidential Elections,” looked at a much broader array of polls and concluded that there was “there is no case where we can trace a substantial shift to the debates.” Political scientist John Sides, summarizing a careful study by James Stimson, writes that there’s “little evidence of  [debate] game changers in the presidential campaigns between 1960 and 2000.” 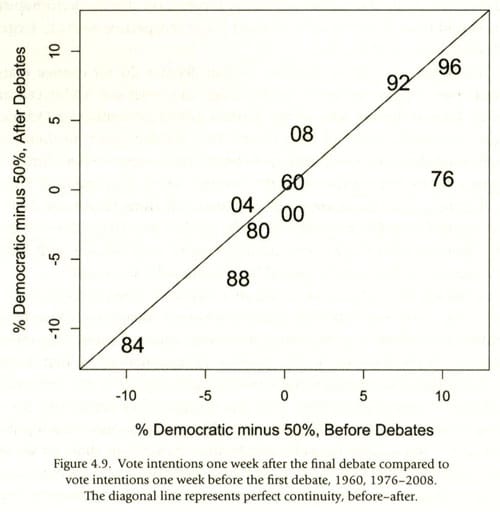 Real Clear Politics has since shown a pretty significant switch in the polls for Romney following the last debate, which most said he won.

I have an idea as to why people watched the debate, and to why debates seem to carry a new type of significance.

In the groundbreaking work Public Opinion, Walter Lippman argued “Of any public event that has wide effects we see at best only a phase and an aspect… Inevitably our opinions cover bigger space, a longer reach of time, a greater number of things, than we can directly observe. They have, therefore, to be pieced together out of what others have reported and what we imagine.”

Further, also noted by Juan Gonzalez and Joseph Torres in their recent book, News for All the People, Lippman goes on to say “In the great blooming, buzzing confusion of the outer world we pick out what our culture has already defined for us, and we tend to perceive that which we have picked out in the form stereotyped for us by our culture.”

So here’s what I think. The current combination of hyper-consolidated media ownership and content, plus the resulting audience fragmentation and growing influence of social media, has made these hotly contested and highly watched debates more important than ever.

Other than major live sporting events and awards shows (and the occasional tragedy), the debates may be the only time we watch something together as a nation.

Lippman’s double-edged sword is sharper than ever in today’s media age.

A wealth of organized and networked voices can echo the stories of solutions, hope and change from communities across the country, and have an impact beyond election day.

At the same time, well-organized lies are exponentially devastating to families pushed to the margins of democracy and the economy.

So don’t sit out of the debate. Watch it. Comment on it on your social media networks.

An organized and connected community can flex its cultural capital and hold candidates accountable to dignity, justice and human rights.

Join us and you can #ShiftTheDebate at Media Action Grassroots Network’s #MediaJustice Twitter Party.