A May 2017 Pew Research Center poll shows that public trust in the government is near historic lows. Only 18% of Americans today say they can trust the government in Washington to do what is right. At the same time, our leaders in the White House and Congress are increasingly secretive about their practices. 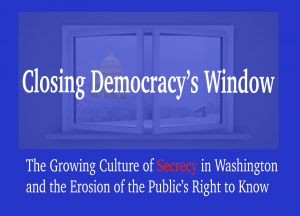 To document the ways transparency and openness have operated during the first year of the Trump administration, Closing Democracy’s Window examines secrecy in the White House, the Environmental Protection Agency, the Department of Justice, and the Department of Homeland Security.

Closing Democracy’s Window describes journalists’ experiences as they report on the government and highlights advocates who represent people harmed by government secrecy.

“In the 1960’s and 70’s, the FBI worked with local law enforcement to discredit or disrupt black dissidents and political organizations through a secret program that was only revealed through the theft of FBI papers on its counterintelligence program,” according to Malkia Cyril, Center for Media Justice co-founder and executive director. “If we don’t demand full transparency, real oversight, and rules that restrain the FBI, the NSA, Immigrations and Customs Enforcement, and the Department of Homeland Security — we may very well see the rebirth of these secret domestic spying programs again.”

Perhaps most horrifying isn’t just that these programs exist in a so-called democracy, but how little we know about these programs and how they work.
In fact, it’s the secrecy of programs that target vulnerable groups that lead to the growth of mass surveillance that impacts us all.”

Closing Democracy’s Window is a report by Open the Government – an inclusive, nonpartisan coalition that works to strengthen our democracy and empower the public by advancing policies that create a more open, accountable, and responsive government.