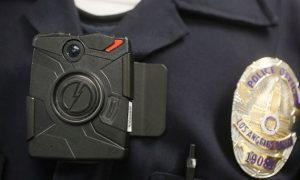 Civil Rights and Media Justice groups across the country released a set of civil rights principles for the use body worn cameras by police. The principles outline the need for civil rights protections in the development of local policies regarding the use of cameras including creating public access to the footage and limitations on use.

“It’s clear that body worn cameras are not the answer. Civil and human rights protections against high-tech profiling and surveillance are. Body cameras aren’t a viable substitute for comprehensive police reform in the 21st century, and in fact may supercharge the potential for high tech racial profiling and surveillance. That is exactly why civil rights principles for body worn cameras are needed. The Center for Media Justice endorses and supports these principles because they offer a useful blueprint that can help protect already overly policed communities from additional high-tech surveillance.

While White House resources would be better spent increasing educational and employment opportunities for those long-excluded by racial discrimination — law enforcement agencies that choose to prioritize implementation of a body worn camera program require a clear civil rights framework for deployment. Body worn cameras aren’t facing the cops, they’re facing civilians. They’re a tool to aid law enforcement in collecting data. As such, civilians need protections from the over broad use of video surveillance by police officers.

These civil rights principles offer that to communities of color, low-income communities, and all those affected by the disparate impacts of a racially discriminatory criminal justice system,” says Malkia Cyril, Executive Director at the Center for Media Justice.