Center for Media Justice and members of the Media Action Grassroots Network (MAG-Net) joined one of the largest digital protests ever for the Internet-Wide Day of Action to save Net Neutrality. The FCC’s plan to slash Title II, the legal foundation for Net Neutrality rules that protect online free speech and innovation, has been widely rejected by civil rights and racial justice activists. 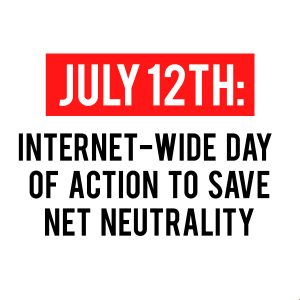 Activists cite the Internet’s capabilities as an organizing tool as a forum for voices that have historically gone unheard to be amplified and urge the FCC to vigorously enforce, not repeal, the FCC’s 2015 Open Internet Order.

MAG-Net member groups Generation Justice, Media Mobilizing Project, and May First/People Link joined organizations and individuals across the country in visiting the offices of their Congressional representatives to demand that they protect Net Neutrality.

Public interest organizations like Fight for the Future, Free Press have helped lead the fight to protect Net Neutrality alongside leading civil rights groups Color of Change and Center for Media Justice, and on this day of action are being joined by some of the largest tech sites in the world. Twitter, Reddit, Netflix, Amazon, Facebook, Google, Kickstarter, Etsy, Vimeo, Mozilla, OK Cupid, Medium, and hundreds of other major sites will display prominent messages on their homepages on July 12 to encourage users to take action.

The following are quotes attributable to participants in today’s action:

“Title II Net Neutrality protections are the civil rights and free speech rules for the internet. When traditional media outlets refuse to pay attention, Black, indigenous, queer and trans internet users can harness the power of the Internet to fight for lives free of police brutality and discrimination. This is why we’ll never stop fighting for enforcement of the Net Neutrality rules we fought for and saw passed by the FCC two years ago. There’s too much at stake to urge anything less.” – Malkia Cyril, executive director at the Center for Media Justice.

“In an era when immigrant and Muslim communities are being scapegoated by the White House, an open Internet protected by Title II is vital to preserving our democracy. When the Muslim Ban was announced, activists used the open Internet to mobilize millions at airports across the country. When undocumented immigrants are viciously targeted and removed from the country, families use the open Internet to amplify the message that they are #HereToStay. To trust cable companies to protect consumers without oversight, which is what FCC Chairman Ajit Pai wants, is to accept the slow degradation of our democracy.” – Steven Renderos, organizing director at the Center for Media Justice.

“In our hometown of Philly, the poorest big city in America, we know that we won’t get the fast, secure, equitable internet we need unless we demand it – we can’t count on Comcast’s promises. Our communities have a strong history of winning accountability from Comcast because our lives and movements depend on net neutrality and access to the right to communicate. We are proud to participate in today’s Internet Day of Action and to continue our organizing for civil and human rights, online and in the city we love.” – Bryan Mercer, executive director, Media Mobilizing Project