Now a professor at the University of Massachusetts – Lowell, Charlotte Ryan has taken a fascinating journey from community and labor organizer to media messaging pioneer. 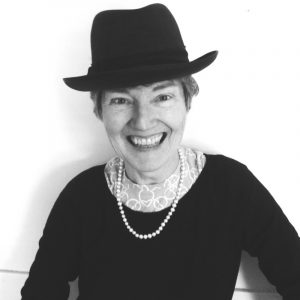 Charlotte is from Lowell, a working class town in Massachusetts famous for its textile mills. She was a first-generation college student during a turbulent time in history: Martin Luther King, Jr. was assassinated, the Vietnam War was underway, and the Second-wave feminist movement developed all during her time in college.

As a student, she organized with farm workers and learned Spanish. This enabled her to move to Chile after graduation, where she became involved in media work on cultural education.

Charlotte was inspired by this media work because she saw how regular people could radically shift culture and work in solidarity with one another.

When she returned from Chile, she became a labor organizer in Boston – a city with deep racial divides. For many years, she worked with communities to gain equal treatment under the law and fair access to good schools and public services.

With her partner’s support, Charlotte was able to go back to school to study how social movements successfully frame their work and accomplishments. Her studies combined her media experience in Chile with her community organizing work in Boston.

Charlotte’s dissertation, called Prime Time Activism, was a pioneering book on media framing. Before Prime Time Activism, academics writing about this issue only talked to one another. No one had distilled the language into something useful for organizers to implement in their work. 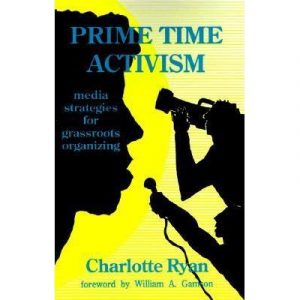 But, because Charlotte had been an organizer, she knew this research could benefit social movements and sought to partner with organizers to help them develop messaging.

“When you hire outside experts to shape your messages, they’ll tell you what you can and can’t say based on what the media landscape is. It breaks down the process of building a shared understanding about issues,” says Charlotte.

“Social movements know the value of lifting up marginalized people’s voices in order the create change. This is why it’s critical for organizers to understand how the media operates and how to effectively frame their issues to empower people.”

Charlotte first became involved with the Center for Media Justice (CMJ) nearly 10 years ago. She was excited to work with CMJ because she hadn’t met many groups that respond on the ground when a crisis happens but also think structurally about how to get communities involved in wider political conversations.

“As a white person, I was aware that I had privileges and opportunities in life that my friends and colleagues who are of color did not have. This can sound like smarmy rhetoric, but it’s painfully concrete. Like me, my friend Robert (born and bred in Detroit) had been a first-generation college student. But he was also African American.  We worked in back-to-back cubicles. White colleagues would walk right by Robert’s cubicle to tell me about opportunities for grants, workload reductions, and so on. In the end, I survived a grueling tenure process; Robert didn’t–even though he was brilliant.  These race and class inequalities also permeate daily experiences with communication systems. They don’t change without hard work, and CMJ actively works to dismantle them,” says Charlotte.

Years later, Charlotte continues to support CMJ as a Sustaining Donor because she knows her monthly donations help to keep the organization stable. “I know that it takes financial stability to build an organization,” says Charlotte. “We can’t allow our organizations to be completely dependent on foundations or let foundations set the agenda for our movements.”

When asked where she sees the future of CMJ’s work, she responded, “I trust that CMJ is going to be on the foreground to show people the links between seemingly separate issues like Net Neutrality, equitable digital systems, and police brutality. CMJ’s work connects issues and communities.”

We’re fighting for digital and communication rights. Join Charlotte in becoming a Sustaining Donor to protect our communities from Trump’s attacks!

Charlotte Ryan is an Associate Professor at the University of Massachusetts Lowell, a former community organizer and labor organizer, and a former Center for Media Justice board member.
WIth Marcus Breen and Kevin Carragee, she coordinates a network of activist scholars founded by the Movement Media Research Action Project (MRAP).