Tonight, Center for Media Justice founder and executive director Malkia Cyril was awarded a 2016 Pioneer Award at the 24th Annual Electronic Frontier Foundation Pioneer Awards ceremony for their work as a leading voice and organizer on the issues of Net Neutrality, surveillance, communications rights for prisoners, and media representation of people of color. 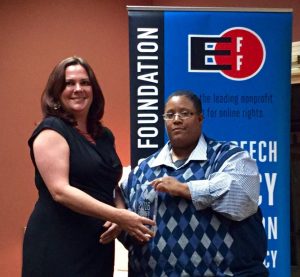 Held at the Delancey Street Town Hall in San Francisco, CA, Malkia was honored alongside data protection activist Max Schrems, the authors of the Keys under Doormats report, and the lawmakers behind CalECPA—the California Electronic Communications Privacy Act.

The Electronic Frontier Foundation (EFF) established the Pioneer Awards in 1992 to recognize leaders on the electronic frontier who are extending freedom and innovation in the realm of information technology. Past honorees include Aaron Swartz, Amy Goodman, Bill Atkinson, The Association for Progressive Communications, Citizen Lab, and USENET software developers.

A nationally recognized leader in communications justice, Malkia’s writings have appeared in Politico, the Huffington Post, Motherboard, Mic.com and Essence Magazine. Malkia is a Prime Movers Fellow and recipient of the 2015 Hugh Hefner 1st Amendment Award for framing net neutrality as a civil rights issue.

Malkia is also featured in Ava DuVernay’s upcoming Netflix documentary The 13th, which opens at the New York Film Festival on September 30th.