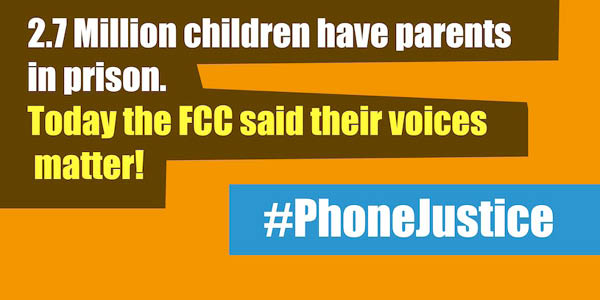 On Friday, August 9th, 2013, the Federal Communications Commission (FCC) took a major leap forward on behalf of those 2.7 million children by voting 2-1 in favor of reforming the prison phone industry and ending the price-gouging of families who accept calls from their incarcerated loved ones. Cheers could be heard from the people present at the vote, including families of prisoners, advocates and allies.  Acting Chairwoman Mignon Clyburn – who has led the fight on the inside for prison phone justice- was visibly chocked up she paraphrased a Sam Cooke song, saying “it’s been a long time coming, but change has come.”

This victory was the direct result of a hard fought battle started more than a decade ago by the families of those incarcerated, who have been paying sky-high prices for years to stay connected.  Two years ago the Campaign for Prison Phone Justice was launched to amplify the voices of those being victimized by a predatory prison phone industry. Jointly led by the Media Action Grassroots Network, Working Narratives, and Prison Legal News, the campaign is a diverse cross-sector collaboration of public interest groups, civil and human rights organizations, artists, community leaders, those incarcerated and their families.

Though there is more work to be done, we wanted to take a moment to reflect on the amazing work of the more than 90,000 groups and individuals who put out the call to the FCC to take a stand for strong families and safe communities, and to thank the FCC and legislative allies who answered that call.

Articles, blogs and statements from around the #phonejustice world

From Bethany Fraser’s statement to the FCC…

UCIMC: FCC Votes to End Predatory Phone Rates for Inmates and their Families

Associated Press: Feds to slash cost of phone calls made from prison