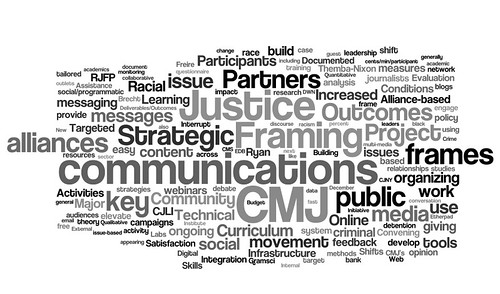 In May we partnered with Progressive Communicator’s Network, Solidago Foundation, Quixote Foundation, Media Democracy Fund, and Ford Foundation for a series of briefings entitled “The State of Grassroots Communications: Shifting the Landscape Toward Justice.”

The sessions brought together grassroots communications practitioners with a commitment to justice issues and funders who support justice and social movement efforts in a rare opportunity to think together about opportunities and imperatives to strengthen communications as a tool for change that will substantively impact U.S. culture, consciousness, and political policies.

This is a time of unprecedented change for grassroots communications practitioners. Factors such as the current economic crisis, rampant media consolidation, emerging new media technology and shift in administration bring unique and urgent challenges and opportunities. Faced with this changing communications landscape, grassroots justice organizations must make smart decisions about how to effectively communicate to advance their program and political work, often with fewer resources and confronted with changes in how media is made and news is communicated.

These times demand whole new approaches to change making and communication. It’s no longer enough to win individual victories, we must fundamentally shift our social, cultural and political ecology.

The Center for Media Justice, for example, has put out a call for a comprehensive and transformative approach to justice communications: Truly effective and sustainable movements for racial and economic justice must have the capacity, strategy, and leadership to advance a shared worldview and agenda, watchdog power, elevate strategic stories to a wider audience, increase engaged popular governance, and influence policy to change social conditions. They outline a powerful strategy that tackles race head on, brings the voices of the disenfranchised to the center, transforms public narratives, increases media access, and ultimately changes public consciousness and policy. Join us to hear about these cutting edge strategies and more communications realities from across the country.

Call One: The State of Grassroots Communications: Shifting the Landscape Toward Justice by anotherpundit

The State of Grassroots Communications: Shifting the Landscape Toward Justice by anotherpundit

In June we were asked by Public Interest Project’s Alliance-Building program to participate in a donor briefing on communications strategies for alliance building.

· What this growing trend means for our nation and, in particular, communities of color who are the disproportionate targets of these policies

· How, despite the challenges, advocates are finding opportunities to fight against these harsh and discriminatory enforcement practices through strategic alliances

The criminal justice system is increasingly being used by policymakers to address social and economic issues that disproportionately impact marginalized communities. This dangerous development, which has been in practice for many years, was most recently magnified by SB1070, an Arizona law which seeks to identify and prosecute undocumented immigrants. Misguided policy decisions which focus on criminalization are also playing out in schools around the country where zero-tolerance disciplinary policies are pushing our most at-risk youth out of school and into the juvenile justice system. In order to challenge the devastating outcomes of these punitive policies advocates are building strategic alliances, which redefine and underscore the importance of working together across communities, issues and strategies.

Discussion 1:
The Intersection of Immigrant Rights and Criminal Justice

Last month, Arizona signed into law a draconian bill making it a crime for undocumented immigrants to reside there and giving law enforcement the discretion to stop anyone who they suspect to be undocumented. This breach of fundamental human rights has many in our country alarmed but unfortunately it is part of a national trend seen over the last decade where increasingly immigration law has become intertwined with criminal justice system. Since the September 11th attacks, immigrants have been undue targets of enforcement backlash. Last year alone, an estimated 369,483 individuals were detained by Immigration and Customs Enforcement (ICE), a figure that has more than doubled since 1999. In spite of this, criminal justice and immigrant rights advocates are working to develop joint strategies to stem the trend towards criminalization. During this discussion, advocates will share what it means to work in alliance during tough times and their vision for long-term solutions.

In a separate but connected trend, children are getting caught up in the criminal justice system because of strict disciplinary practices in schools. This past February, in a story that made national headlines, a junior high school student from Queens, New York was handcuffed and arrested for doodling on her school desk. This story is no different from thousands of others where minor infractions in schools are being met with harsh punitive measures, which push students out of schools and into the criminal justice system. In 2007 alone, there were about 3.3 million students who were suspended from school. Zero tolerance disciplinary policies across the country are creating hostile school environments and creating a pipeline into the prison system for marginalized LGBTQ and youth of color. Groups across the country are calling for sound alternatives that encourage learning and curtail the number of youth who get caught up in the juvenile justice system. During this discussion, advocates will address the impact of excessive disciplinary policies on students and society at large and the importance of intergenerational and cross-racial alliances in the fight to reform these policies.

MediaJustice Applauds the Confirmation of Bedoya as FTC Commissioner