Black on Black Digital Freedom: Why I Participated in Yesterday’s Internet Strike 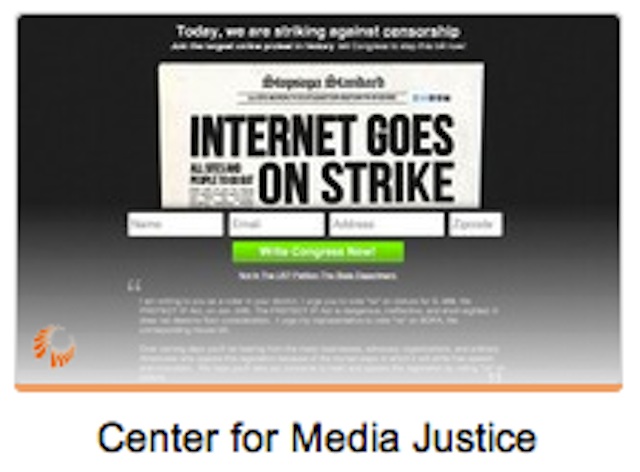 As a black person, too often I turn on the television or open a newspaper and see criminalizing images of my community reflected back to me.  Not only do these images threaten policies to expand opportunity, rights, and services to black communities, but they hurt me personally.  I hate it.

On the Internet, I found a way to be creative, to be all parts of myself at once.  I can share my poetry, or put a track I love behind it and turn it into a multimedia piece.  I can riff off articles I have read, exchange best practices, and innovate strategies for movement building and economic development.

According to two new bills in Congress, some of my efforts to imagine and create a better future for me -and the millions of black people in this country- constitute online piracy.  These bills aim to block my ability to learn about fights for media rights and access in Venezuela, and will add to the criminalization members of my community already face in traditional, more centralized media platforms.

The Internet isn’t freedom, but it’s promise is a path to freedom for black communities- and both the Stop Online Piracy Act (SOPA), and the Protect IP Act (PIPA), threaten that promise.  That’s why the Center for Media Justice faded to black yesterday- to protest censorship of black voices, brown voices, and the voice of innovation in this country.

What’s worse, these bills propose to engage ICE and other law enforcement agencies in tracking down these “criminals” who are sharing and innovating ideas.  They call us pirates, and call our sharing stealing.

We are black artists from countries all over the world.  We are black innovators and media makers.  We are black organizers and movement builders, and we know that any legislation that digitizes the criminalization of black communities is wrong, and should be resisted.

As the Executive Director of the Center for Media Justice, I am convinced that our mandate to protect media rights and access for all people is threatened by these bills.  As one of the 13% of black people in the United States, and one the 99% of people who aren’t wealthy- my voice is among millions saying don’t build another wall in this country to divide us.

Because when we build a digital wall of censorship, we not only fail, we fall.

Black Communities and the Internet Strike