Tonight, Argo is up for an Oscar for Best Picture.  And if you believe the early predictions, it could win.   Like many, I have negative feelings about Argo—Ben Affleck’s fictionalized account of a CIA plot to rescue six U.S. citizens during the Iranian hostage crisis of 1981.  While some are calling it a “great drama,” others like former President Jimmy Carter say the Hollywood production takes a lot of artistic license, maybe too much.  “Ninety percent of the contributions to the ideas and the consummation of the plan was Canadian,” Carter said. “The movie gives almost full credit to the American CIA. And with that exception, the movie’s very good.” 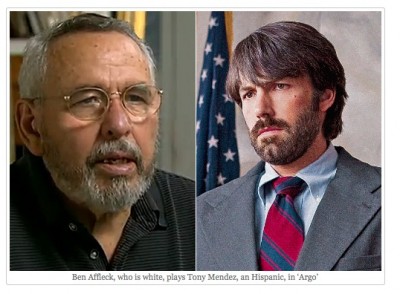 My complaint differs, however.  Not only does Affleck take license with the historical accuracy of the story, he also tosses in race, casting himself as the Latino lead character, Tony Mendez.  Since artistic license is most often understood as a method used by artists to improve their work—this isn’t just troubling, it’s a manifestation of systemic racism.

Whitewashing in Hollywood is hardly new, but that doesn’t make it right.  And though black and Latino audiences buy movie tickets at a higher rate than white viewers, we’re rarely behind the camera, and our roles on screen are often stereotypical.  Latinos in Hollywood films are rarely the protagonists—in fact, a UCLA study found that of all leading roles, only 1.2% go to Latino actors.  In the rare instance we do get a significant role, our characters are usually marginalized or underdeveloped, or we’re cast as sexual, aggressive, or childlike.  In fact, the most common roles for Latinos are gardeners, maids, dropouts and criminals.

Wonder if this has any effect?  Just last year, our allies at the National Hispanic Media Coalition (NHMC) commissioned a national poll, which found the media negatively affects how immigrants and Latinos are portrayed.  Those who watched Latinos being portrayed in a positive light viewed Latinos as intelligent.  Those who watched Latinos cast in stereotypical roles tended to view Latinos as unintelligent. Additionally, the poll found that 17 percent of survey respondents believed that the majority of U.S. Latinos are undocumented–with no clear base for this assumption.

These statistics only prove what we already know at the Center for Media Justice—that media (in all its forms) is a powerful medium that affects the way our society sees the world.  Affleck could have chosen to cast a Latino, to play a Latino—not because it would have made him a better person—because it would have made a more authentic film.  It’s not as if this value is foreign to him– let’s be honest, would he have ever cast a Latino to play the lead in his working-class, Boston based, The Town or Gone Baby Gone?