An Interview on How All (Strong) Families Matter: Collective Action Framing with Finesse

“You had me at hello.” Renee Zellweger in Jerry Maguire (or me during my interview with Shanelle Matthews of Forward Together/Strong Families). 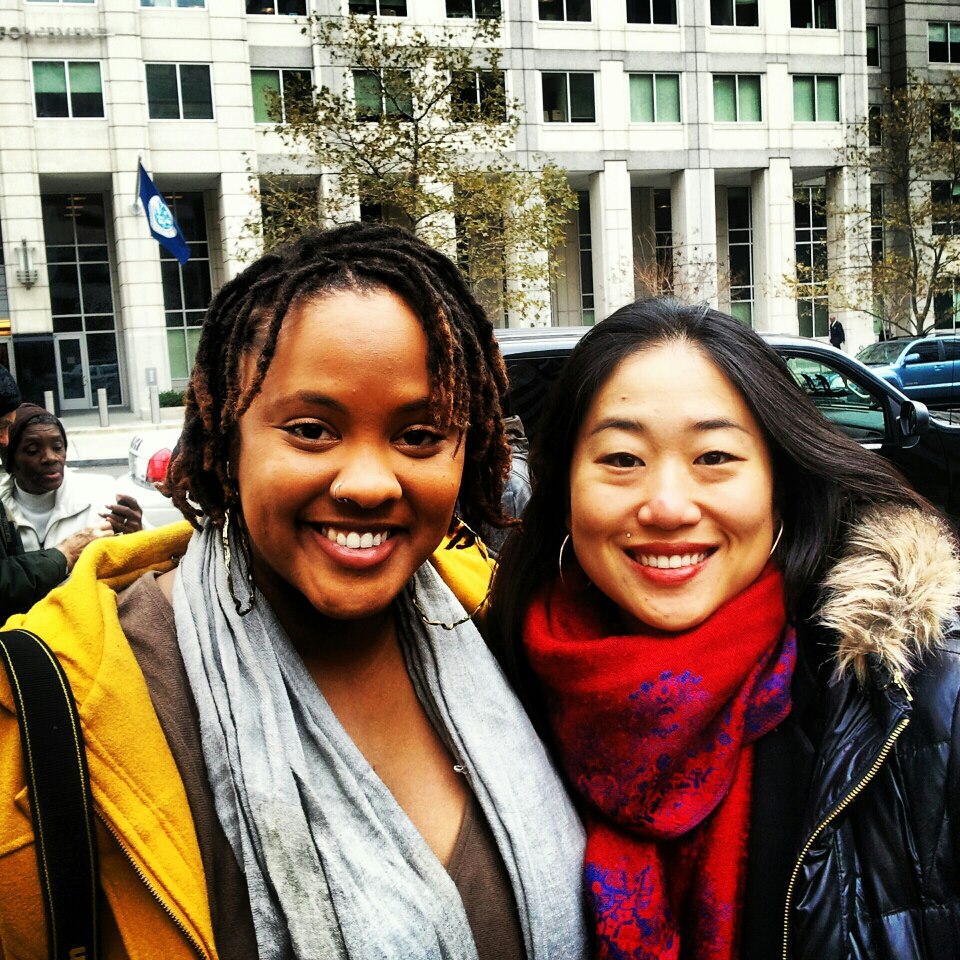 As many of you may know, I am head over heels in love with CMJ’s fellow Bay area-based organization Forward Together and the Strong Families movement. One core message that comes out of their reproductive justice framework is that more than 3 out of 4 U.S. households are not heterosexual married couples with biological kids, and they’ve given this message life through various projects, one of my favorites being their Mama’s Day Our Way e-card campaign. 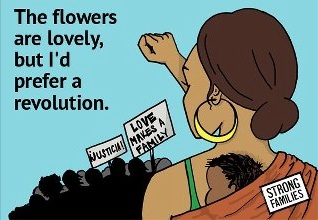 “Facts take on their meaning by being embedded in frames, which render them relevant and significant or irrelevant and trivial….To be conscious of framing strategy is not manipulative. It is a necessary part of giving coherent meaning to what is happening in the world, and one can either do it unconsciously or with deliberation and conscious thought,” explain Charlotte Ryan and William A. Gamson in “The Art of Reframing Political Debates.”

The success of the Strong Families frame lies not only in is its powerful (re)construction of the family frame and the significance and dignity it gives to the experiences of the vast majority of families in the U.S., but also in its use of collective action framing. The three (participatory communications) steps in collective action framing are to:

I had the pleasure of interviewing Shanelle Matthews, Communications Manager at Forward Together about the organization, the Strong Families movement and the amazing communications work they do to reframe and engage communities around reproductive justice. Get the scoop on some of their practices below and check out the Center for Media Justice Toolbox for help on framing and messaging.

CMJ: How did the Strong Families frame come about and how do you think it allows for the inclusion of LGBT folks, men, and other allies in a way that the reproductive rights frame, often considered as being a “women’s issue,” has not?

FT/SF: There was a landscape among reproductive justice organizations working towards shared goals but working disparately and across geography. Strong Families uses a movement-building model that builds on our collective work but allows for an echo chamber that increases our impact across geography.

There’s a longstanding narrative that there are deserving families, or “bad” families and “good families”. Strong Families aims to shift the way people think about families and deconstruct the existing narratives of what families look like that has been pervasive for over a century. As a frame, Strong Families values the right to parent, not parent and to parent the children you have with dignity. Reproductive justice, which intersects with economic and racial justice, is distinct from the narrower reproductive rights or health frames because it’s inclusive of the full spectrum of our lives, including the lives of LGBT people and male allies. We work with male allies through organizations like the Brown Boi Project who are re-envisioning the power imbalance between traditional notions of masculinity and femininity. This is also true of organizations like Men Against Rape and Men Stopping Violence that work within the reproductive justice framework toward the same goal.

CMJ: What are the conditions that you are trying to change both in public debate and public policy?

FT/SJ: The political landscape around reproductive rights has devolved into single-issue fights around abortion or parenting rights and the broader context gets lost. 3 out of 4 families in the U.S. don’t identify as two-parent, heterosexual families with biological children, and yet, federal and state policies don’t reflect that reality. For example, on a federal level, we’re working on Strong Families analyses around immigration policies and LGBT/second-parent adoption policies that are punitive for so-called “non-traditional” families and children. We are also engaged in policy fights on a state-by-state basis as well. In New Mexico we’re working on getting access to maternity leave for pregnant and parenting teens. Our bottom line is wherever you come from and whatever you look like, you deserve the right to care for your family. And federal and state policies should reflect that.

CMJ: Forward Together recently changed its name from Asian Communities for Reproductive Justice. Can you talk about that shift?

FT/SJ: Forward Together as an institution has been around for almost 25 years and underwent 3 name changes during that time. It’s important to us to grow and expand with the political climate so that our constituency knows what we’re doing and who we are. Reproductive justice is fundamentally tied to social, economic and racial justice, and requires the vision to connect them all. Historically, Forward Together has been an organization that served primarily Asian and Asian-America communities, but we are intentionally building a multiracial movement that connects different sectors based on our shared interests so that all families can thrive, and we want that to be reflected in our identity. We care very much for the communities we’ve served for the last 25 years and maintain programming for our communities. Our Forward for Youth program organizes and educates Oakland Asian Pacific Islander youth on reproductive justice and sex education within a multiracial framework that strives to be inclusive of all communities.

CMJ: How is Strong Families a participatory frame? How is does it differ from more mainstream national organizations?

FT/SF: National reproductive rights organizations have recently embarked on a new messaging strategy. Planned Parenthood recently denounced the term pro-choice, which no longer resonates with their constituency. In our experience, we’ve found that neither reproductive justice nor pro-choice, as a message, resonates with our communities. Although we advance our work using reproductive justice analysis and strategies, we utilize Strong Families messaging framework, which describes access to birth control and abortion care as one aspect of the rights, resources and recognition that every family needs to thrive. The Strong Families frame resonates a wide and inclusive swath of our communities as well as many elected decision-makers.

Our tagline is “All families matter.” Antithetically, there are people out there who would have us believe that only “some people matter,” and that only married, heterosexual families without disabilities and with biological children are the core constituency we need to care about. We’re confident that anyone who equally values the dignity of all families will embrace the Strong Families frame. Our frame also makes the case that you can’t fight for economic, immigrant, environmental, media, gender or any other kind of justice without fighting for strong families, they are entirely intersectional. This forges the intersection between the collective work of Strong Families organizations

We aren’t asking organizations to do new work; rather, we’re engaging people where they’re at. We use a movement building model that elevates how reproductive justice shows up as an everyday issue for all our communities; however, because reproductive justice as a framework is sometimes difficult to communicate and understand, we also use the Strong Families framework to engage people. Family resonates with everyone.

CMJ: How do you feel Strong Families compares to other national movements?

Strong Families isn’t all that different when you look at national initiatives who we work in conjunction with, like the National Domestic Workers Alliance  we all want to be able to care for ourselves and our families. A movement isn’t birthed by one organization. It takes multiple organizations, communities, and structures moving together as one in our respective homes and communities. Strong Families helps to make our constituencies’ families stronger.

CMJ: What are some of the communications tactics Strong Families uses to educate and engage people in the reproductive justice frame?

FT/SF: We employ a culture shift strategy and work closely with artists from across the country to represent the likenesses and needs of our families. For example, the Mama’s Day e-cardsshifts the way people view mothers. By honing in on one significant, mainstream holiday, it makes it easier for some audiences to understand the Strong Families and reproductive justice

frame. Showing images of some of our most impacted mothers, mothers who have died to get their families safely across the border, mothers living with disabilities, illustrates that Mother’s Day isn’t just for an upper echelon of mothers. It’s an important day to acknowledge and honor all mamas.

We hope to provide a model for other movement organizations to adopt of how to work with cultural workers in a healthy, non-transactional way that lifts up their autonomy. That is one of the best parts of the Strong Families initiative–being able to tap into local art and culture. Another is building on the work that local groups are already doing and working with their constituencies who are the experts on their experiences. The messages and campaigns we develop lead with the stories of the most impacted people–we talk with the community to hear about their experiences and frame around their stories. Through our youth program, youth work directly with our youth organizing team to develop the program’s curriculum. They inform us on what kind of sex education they need and what they’re not learning about, and we employ curriculum and strategies developed specifically from those needs.

CMJ: What is your social media distribution and how do you measure success?

FT/SF: We believe that if we’ve changed one person’s view of motherhood we’ve been successful. A lot of organizations are trying to figure out what measuring success means right now. The way we organize online is very different from how we experience organizing in the real world. In online campaigns, we often look to blog comments, Facebook message or our news feed to see how people are responding. If the comments are not positive, we restrategize. One important question is if our audience is already with us, how do we know if a shift is happening? It’s about meeting people exactly where they are. If their desire is to understand what the Strong Families’ end game is, do we have the time and the tools to talk to and engage with them on that level? If people get it but are not ready to share, how do we move our message? Measuring success is done on a case-by-case basis, and we will keep at it until every family has the rights, recognition, and resources they need to thrive.

CMJ: What have some of the impacts of Strong Families been?

FT/SF: While we are moving humbly through our work and not making assumptions, we feel we have definitely made an impact. Strong Families is in its third year, and over 80 organizations and an estimated 10,000 individuals have joined us. People seem to understand why Strong Families and reproductive justice are important, they’re sharing information with their families and friends, growing their desire to support the work and volunteer.

Since Strong Families’ Mama’s Day campaign, I’ve met with very emotional people at every place I’ve traveled to, who told me that it was the first time they’ve been able to send a card to their mothers, because they’ve never had the opportunity to engage with their mothers emotionally without anything “that was for us.” We found a home for impacted moms to engage online around the Mother’s Day holiday.

In Oakland, youth in our program conducted participatory action research on sex education in each school district. They found that all youth were not receiving mandated comprehensive sex education, but queer youth and youth with disabilities were not receiving any at all. The youth are now meeting school board members to communicate how vital and important it is for young people in Oakland to be in a deeper, more engaged conversation about sex, their bodies and their health. In New Mexico, we’re working with ally organizations like Young Women United and the Media Literacy Project to make the invisible visible and engage New Mexican families. The impact of our work is realized through the communities we touch, our goal is to make sure we continue to use the best tools and strategies available to us to make the biggest impact.